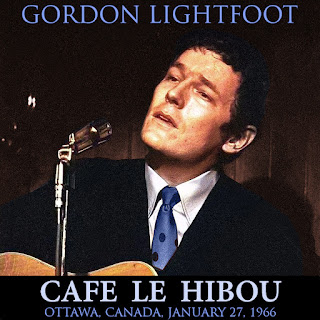 I have to admit that I'm not a big Gordon Lightfoot fan. When he's on, such as with a song like "If You Could Read My Mind" or "Early Morning Rain," he's amazing. And he has a lot of those songs. But I don't listen to his albums all the way through, since he has even more filler.


That said, I've posted a live album from him, and now I'm posting another, because I think they're exceptional. Here's the link to the previous one I posted, which dates to 1971:

If you've been following this blog, you're probably noticed by now that I have a particular fondness for acoustic guitar performances. That 1971 concert I just linked to is an acoustic one, and this one is too.

But I think this one is even more remarkable than that one, due to a combination of its date and its sound quality. This concert is from the very start of 1966. There are very few bootlegs of any kind going that far back, and the ones that exist usually have poor sound. Yet this recording is a really fantastic sounding soundboard recording! Furthermore, I've added some bonus tracks from another concert in 1965, and that also is a really nice soundboard recording too.

That is particularly surprising because Lightfoot's musical career was just getting off the ground at the time. His first album "Lightfoot!" came out in January 1966, the exact same month as this recording. He'd been playing concerts and recording singles for years prior to that, but it wasn't until he released his first album when his popularity and reputation slowly grew. Thus, he wasn't very well known, and this concert had him playing in a small club. (For the 1965 bonus tracks, that's even more the case. You can hear from the applause that he played to a much smaller crowd.)

I like this concert a lot, even though I'm not a big Gordon Lightfoot fan, for a number of reasons. For one, I think his first album is his strongest album. That means he had a lot of excellent songs to play, even though it was still early in his career. For another, he had a lot of entertaining between song banter. It reminds me a lot of the four Joni Mitchell concerts from 1967 and 1968 I've posted here recently, where she talked before every song.

A third factor is that Lightfoot played some songs here that didn't appear on any of his albums, and they're really good too. Including the bonus tracks from the 1965 concert, the songs "Let's Get Together," Turn, Turn, Turn," "Old Blue, and "The Auctioneer" either were never released on album by him, or were only released much later.

Of course, "Turn, Turn, Turn" was a number one hit for the Byrds in 1965. But note that the 1965 concert this comes from took place months before that Byrds version was released. The song was well known already in folk music circles, because it had been written and performed by Pete Seeger, so Lightfoot's version is based on that and has nothing to do with the Byrds version.

Speaking of those Joni Mitchell concerts I mentioned above, I had a lot of trouble figuring out exactly when and where those were recorded. Turns out I had the same problem here. The bootleg I found claimed the show was from Ottawa, Canada, but didn't mention the specific venue. Other versions of this same bootleg claim it took place at the Riverboat in Toronto, Canada. When I first posted this, I decided that it probably took place at the Riverboat, mostly due to a reference that Lightfoot played at the Riverboat in Toronto on January 18, 1966, and continued to play there for the next two weeks. That means it was highly likely he was still playing there on January 27th.

However, I have since changed my mind, and changed the location to Ottawa. That's due to some comments he made at the start of the song "Piddling Pete," in which he mentioned both Ottawa and Toronto for the setting of the song. One could argue for either location based on those mentions alone. However, a commenter later mentioned that he also referred to Bell's Corners at the start of that song, which is the name of a specific Ottawa neighborhood. That's someone one would assume an Ottawa crowd would know, not a Toronto crowd.

The location is still not 100 percent certain, but I found newspaper references that for the first few years of his career, before he hit it big, he always played in the Cafe Le Hibou in Ottawa. So I'm going with that until and unless something better comes along.

Regarding those 1965 bonus tracks, as I mentioned above, they come from a concert in mid-1965 that is also a great soundboard recording. (Specifically, it took place at La Cave, in Cleveland, Ohio, on May 8, 1965.) But I don't like that concert nearly as much, due to the fact that the recording quickly faded in and out and the starts and ends of the songs, cutting out nearly all of the talking between songs. Plus, there was a lot of overlap between the songs played in the 1966 concert and the 1965 one. So instead of presenting it in full, I've only included the interesting songs that aren't repeats of any of the songs from the 1966 show. Between the two concerts, one gets most of the really good songs Lightfoot had come up with by that point in his career. (In case you don't look at the mp3 tags, the 1965 concert goes from "Let's Get Together" until the end.)

The 1966 concert is fairly short, at only 38 minutes. But it's almost certainly complete. In fact, he mentioned towards the end how the time for his set was running out. Given that he wasn't a big star at the time, playing 30 minutes in a folk club as part of a bill with other artists on it seems to have been par for the course. The same thing happened to Joni Mitchell, for instance. (And, as a fellow Canadian, she played at the same venue a lot in the same time period.) The bonus tracks from the 1965 concert add another 20 minutes to make it a fuller listening experience.

As usual, I'm probably way too verbose with these write-ups. But the bottom line is, this is a great performance with great sound quality, and it's a real treasure to have such a recording all the way from the start of 1966. Even if you're like me and you're not a big Lightfoot fan, this is a very solid album that definitely deserves to be released. In fact, I like it more than any of his official albums.

The photo I chose for the cover art was taken at the Riverboat in Toronto, Canada. It comes from January 1967, not January 1966. So it's not a perfect match for place or time, but it's in the right ballpark for both. If Lightfoot was wearing a suit in 1967, as he is in the photo, then he almost certainly dressed and looked just like that in 1966 as well.

I hate using black and white instead of color for my album covers, so some months after I first posted this album, I colorized the photo.