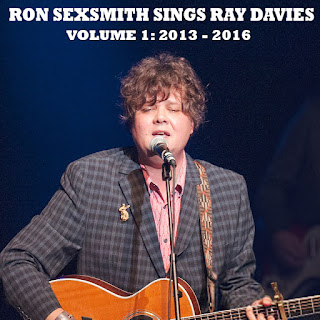 Have you ever heard of Ron Sexsmith? He's a critically acclaimed singer songwriter who has been regularly releasing albums since the early 1990s. To be honest, I haven't yet had the time to take a deep dive into his material. But I do know some of this songs, and I've been very impressed. A good place to start is with "Secret Heart," from 1995, which is probably his best known song, and has been covered by many artists, including Rod Stewart and Feist.

It turns out that Sexsmith is a massive Kinks fan. In fact, he's called himself "the biggest Kinks fan on the planet." Since about 2013, he's been posting hundreds of videos on YouTube in which he plays cover songs in a solo acoustic format, apparently doing so in his house. A lot of those are great, with many unexpected selections. But since I'm a massive Kinks fan myself, I've honed in on his covers of Kinks songs, and collected all of them. I've found enough for two albums, plus about half of a third. He's continuing to post new songs there all the time, so I hope in another six months or a year I'll have enough to fill up the rest of that third album.

In my opinion, Sexsmith isn't an awesome singer or guitar player. But he certainly is talented, talented enough to have a released 14 studio albums and counting. However, there are two things that make his Kinks covers special, I think. The first is that they're all in the solo acoustic format, and the Kinks and/or Kinks lead singer Ray Davies haven't performed that way much. The second is that Sexsmith is such a huge Kinks fan that he goes beyond the usual hits to play some lesser known but still really good Kinks songs. Those two factors combine in a nice way, because it's virtually unheard of to have acoustic versions of most of the rarer Kinks songs he does.

I'm breaking up his recordings into albums that are about 45 minutes long each. I'll post the second one very soon. Oh, and in terms of song order, I simply have kept them in the order he's posted them.

None of these songs have been officially released anywhere. Sexsmith has done a couple of Kinks covers for official various artists compilations, but I haven't included those because they don't fit the solo acoustic format.

For the cover art, the logical thing to do would be to make a cover out of a screenshot from one of his YouTube videos. The problem with that is he usually doesn't look so great. He generally looks like he's just rolled out of bed. Plus, any such screenshot would be fairly low resolution. So instead, here he is on stage in London in 2015.
Posted by Paul at 4:50 PM