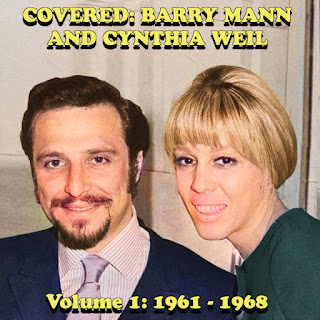 I'm back with more of the Covered series. This time, I'm highlighting the work of the great songwriting team Barry Mann and Cynthia Weil. Although their musical careers actually began at the end of the 1950s, they wrote hits for many decades, and both are still alive as I write this. They're responsible for many classic hits, including "You've Lost that Lovin' Feelin'" (co-written with Phil Spector), which has been played more on the radio than any song ever.

As I usually do with this series, I've included songs written by both of them, as well as those written or co-written by one of them or the other. In their case, their musical collaboration began early, along with their personal relationship. They got married in 1961, and have stayed together ever since. Both Mann and Weil have written hit songs without the other in about equal measure. But the vast majority of the songs here (and on the album to follow that covers the later part of their career) were written by the both of them.

I won't go into more detail about their careers and lives. If you want to know more, here are their Wikipedia pages:

Note that the songs "On Broadway" and "Only in America" are special cases, because they were co-written by Mann and Weil along with another famous songwriting team, Jerry Leiber and Mike Stoller. So I included the songs here and in my Covered albums for Leiber and Stoller, but I was careful to use different versions. (For Leiber and Stoller, I used the George Benson version of "On Broadway" and the Drifters version of "Only in America").

Also note that I've only included the songs that I like. There were a fair number of hits they did that I didn't include. But, by and large, big hits are big because they're really good songs, so I think I've included nearly all of the big hits they were involved in for this time period.

01 Who Put the Bomp [In the Bomp, Bomp, Bomp] (Barry Mann)
02 I Love How You Love Me (Paris Sisters)
03 Uptown (Crystals)
04 Where Have You Been [All My Life] (Arthur Alexander)
05 He's Sure the Boy I Love (Crystals [Darlene Love])
06 On Broadway (Drifters)
07 Blame It on the Bossa Nova (Eydie Gorme)
08 Only in America (Jay & the Americans)
09 You've Lost that Lovin' Feelin' (Righteous Brothers)
10 I'm Gonna Be Strong (Gene Pitney)
11 Saturday Night at the Movies (Drifters)
12 Walking in the Rain (Ronettes)
13 We Gotta Get Out of This Place (Animals)
14 Kicks (Paul Revere & the Raiders)
15 [You're My] Soul and Inspiration (Righteous Brothers)
16 Hungry (Paul Revere & the Raiders)
17 Love Is Only Sleeping (Monkees)
18 Shape of Things to Come (Max Frost & the Troopers)
19 Something Better (Marianne Faithfull)

I get really annoyed how hard it is to find any color photos of some famous people when they were younger. I literally couldn't find a single good color photo of Mann and/or Weil until about the 1990s, and only a couple of bad ones. So I've had to resort to a black and white one, which I've colorized. This photo apparently was taken in 1969.

You can't tell because I've cropped it, but Weil was sitting up high on a desk while Mann was sitting lower. When I cropped it to focus on their faces, it seemed as if Weil was way taller than Mann, which she isn't. So I used Photoshop to raise Mann up in the photo until he was at Mann's level.
Posted by Paul at 1:58 PM