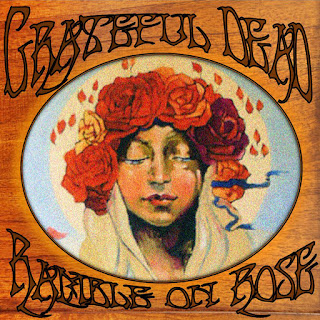 As I've mentioned previously, the Grateful Dead wrote a remarkable number of great songs in the early 1970s, and in my opinion that was the peak of their career, but a large number of them weren't released on any studio album at the time. So I've made four albums that cover the gap between the "American Beauty" album in 1970 and "Wake of the Flood" in 1973. This is the third of those four albums.

The other day, the Reconstructor blog (https://the-reconstructor.blogspot.com/) posted a similar album to this one. According to that blog, the Dead were planning on releasing a studio album in 1972 that would have been titled "Rambling Rose." But instead of going to the studio to record their new songs, they decided to release a live album instead, and "Europe '72" was the result. I'm not sure why they wanted to call the album "Rambling Rose" when they had a song with the title "Ramble On Rose," but the again, the song does include the lyric "Did you say your name is Rambling Rose?"

Anyway, regardless of title, this is another great album that should be a must-have for any fan of the band. As I did with the other albums from this era, I was careful to have a mix of songs sung by Jerry Garcia, Bob Weir, and Ron "Pigpen" McKernan, with Garcia's songs dominating. For each album of these four, I'd include all original songs plus one cover. In this case, the cover is "Morning Dew."

Generally speaking, I've tried hard to avoid using the exact same versions of the songs that are on the 1972 solo albums by Garcia and Weir. Both those albums are so good that every Dead fan should own them and treat them just like Dead albums. (Actually, the Weir album, "Ace," is basically a Dead album of Weir songs, since the full band appears on every song.) But I had to make an exception this time for the song "Cassidy." The Dead didn't play the song for the first time until 1974, which is too late to fit into this album's time frame. Plus, the studio version from "Ace" is fantastic.

There are only seven songs here, but they're long, so the album is 48 and a half minutes long. That would have been unusually long for a single album in 1972, but it was doable. ("L.A. Woman" by the Doors from 1971 was a bit longer.)

As mentioned above, thanks to the "What If" blog for the excellent cover art. I did change it slightly in that some parts of the text was darker than others, and I made it all equally dark.
Posted by Paul at 7:49 PM