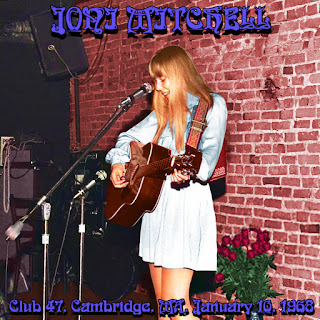 I recently posted three excellent sounding concerts of Joni Mitchell playing at the 2nd Fret on different dates in Philadelphia in 1967. But I'm not going to stop there, because it turns out there are more concerts from the earliest part of her career with excellent sound quality. Here's the next one.

This concert took place in Club 47, a small club in Cambridge, Massachusetts. Her first album ("Songs for a Seagull") was released in March 1968. This took place two months prior to that, so she still wasn't very well known, though her popularity was growing due to word of mouth. Not surprisingly, her setlist is dominated by songs from her first album. But she plays some other songs too, including three (or four) that remain officially unreleased.

I say "three (or four)" because there's some confusion about this concert. It's definitely a great sounding soundboard recording, and nobody seems to doubt the date or location. But there are two popular bootleg recordings of it, and the song orders are very different from one to the other. Plus, one of them has an unreleased song, "Come to the Sunshine," on it that the other one doesn't have. I've decided the one without that song is the correct one, because the last song on it is "Both Sides Now," and before the song starts, she makes a comment that it'll be the last song of her set. By contrast, that song appears in the middle of the song list for the other version. It also makes sense that she ended her set with "Both Sides Now," because it was one of her strongest songs at the time, and would be a hit for Judy Collins later in the year.

But if that version is the correct one, then what's the deal with "Come to the Sunshine?" It appeared in the middle of the setlist in the other version. It terms of sound quality, it matches with the other songs. It also appears to be different than any other version of the song I've come across. (She played it in one of the bootlegged 2nd Fret 1967 concerts too.) Not knowing what else to do, I've stuck it at the end of this album. Maybe it's from this same concert, maybe it's from somewhere else, but it's a good version that deserves to be heard in any case.

I've separated her between song banter onto separate tracks. One thing I really like about her early concerts is that she usually was very talkative. I suppose it was a lot easier to do that when playing in a small club than playing in huge stadiums, as she later would do. For some of these songs, she speaks for a couple of minutes and sheds a lot of light about what the songs the mean.

Because the sound quality is so good on this, I didn't have to do much tinkering. But there were a couple of songs with some glitches in them. For instance, there was one spot in "Conversation" where the recording slowed down for a second or two, making a strange sound. Luckily, it was at a spot where she wasn't singing, so I was able to fix that by patching in a repetition of that music from elsewhere in the song. I did that same sort of thing for a couple other songs, including for some of the talking between songs.

The cover art photo is of Mitchell playing at the Bitter End in New York City, on October 23, 1968. I probably could have found a photo from earlier in 1968, but I really like this one because I think it ably shows the atmosphere in the small clubs she was playing at the time. I colorized it.