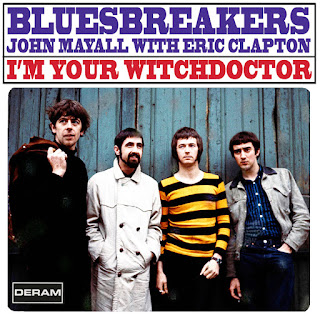 I just posted an album of BBC performances by John Mayall and the Bluesbreakers with Eric Clapton. As I explained in that post, the 2006 deluxe edition of that band's "Blues Breakers with Eric Clapton" album included a long bonus disc of extra tracks. I decided it makes better listening to split that in two, along with adding some extra tracks. So that BBC album I just posted is the first part of that split, and this album is the second.

So what's on this album? I've used it as a catch-all of everything Clapton did with John Mayall and the Bluesbreakers while he was a part of that band in 1965 and 1966. The first five songs are studio tracks. Four of those are A-sides and B-sides.

The next six songs are live tracks. They were professionally recorded for a live album that never got released. So their sound quality is excellent, although, oddly, there's virtually no audience noise at the end of each song. Instead, for most of them, there's some brief talking by band members that quickly fades out. Musically, I think these live tracks are the best part of this album. Clapton is able to stretch out with some great guitar soloing. Also note that Jack Bruce plays bass on these live tracks, but not with anything else recorded by the Bluesbreakers. Of course, Bruce and Clapton would go on to form Cream with Ginger Baker shortly after Clapton left the Bluesbreakers.

Finally, I've ended the album with three songs from a group known as "the Powerhouse." This is kind of an oddity. They weren't a real band; they were a group of musicians who got together one time only to record these three songs for a various artists compilation called "What's Shakin'." I figure they belong here more than anywhere else because they feature Clapton on guitar, and they were recorded in early 1966 while Clapton was still a part of the Bluesbreakers. In addition to Clapton on guitar, the songs feature Steve Winwood on vocals, Jack Bruce on bass, Paul Jones on harmonica, Pete York on drums, and Ben Palmer on piano.

It turns out this album is longer than the BBC Sessions one, at 48 minutes long. By putting the BBC performances on a separate album, I was able to avoid instances of the same song appearing on one album.

I put some extra effort into the cover art in order to make it appear like an album that could have been released in 1966 or thereabouts. I used the cover to the "Blues Breakers with Eric Clapton" album as a rough guide. I found a different photo of the band from that time period as the central focus.