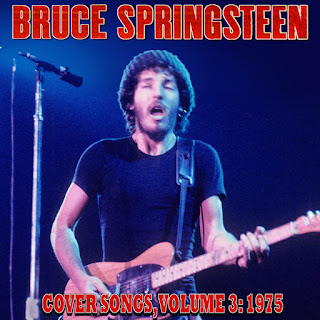 I said I'd try to post an album a day of Bruce Springsteen's cover songs until I run out of albums, so here we go. This album only has songs from 1975.

After lengthy explanations for the previous two albums in this series, I thankfully don't have much to say this time. As I'd mentioned last time, in the last couple of years, Springsteen has officially released many dozens of concerts. That starts to have an effect here, because five out of ten songs are from such albums. However, the unreleased songs generally come from pristine soundboards, so I don't think you'll notice much of a difference between the officially released songs and the others.

Generally speaking with this series, I've cut out whatever talking there might be before or after a song, to focus just on the music. But during the 1970s especially, Springsteen often liked to tell lengthy stories in the middle of songs. I've kept those as they are. There's a good example on this album, with "Pretty Flamino," normally a short pop song, getting extended to 12 minutes thanks mostly due to a lengthy story in the middle of it.

The cover art photo is of Spingsteen in concert in Amsterdam in 1975.
Posted by Paul at 7:56 PM