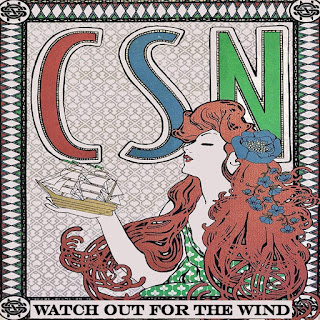 Whew! I'm soooo glad to finally post this album. I've been wanting to post it for months. It's the last of my long series of "alternate universe" Crosby, Stills and Nash albums, in which I imagine they had their act together much more than they really did, and finished more albums together than they really did.

I created this album a couple of years ago. But the reason I delayed on posting it had to do with sound quality. When I was about to post it, I listened to it and decided that a bunch of songs simply didn't sound good enough. I figured I could probably find better sounding versions if I searched high and low, but I was too lazy to do that for a long time. I've finally gotten around to it, and I'm glad to say I did find better versions in almost every case. I replaced most of the songs. I decided that sound quality was more important than using versions with all of Crosby, Stills, and Nash on them, especially since I originally had some versions from CSN concerts that were effectively solo versions anyway, played during the solo spots of those concerts. The only song that still sounds subpart to me is "Olympia," but I found a version that at least is acceptable for my standards.

Now, let me address the musical content, sound quality issues aside. CSN broke up in 2015 (and CSNY for that matter). So far, it seems that may well be a permanent end, because there were a lot of hurtful things said, and a lot of bad blood. It's a tangled story, but the long and the short of it is that the others couldn't stand working with Crosby anymore, and Crosby admits he can be very difficult to deal with.

It's a shame that they didn't pull themselves together enough to release one last studio album of new material before breaking up, because they actually were having a creative renaissance in their last few years. For nearly ten years, roughly 2003 to 2013, it seems that Crosby, Stills and Nash wrote relatively few few good new songs. But Crosby and Nash have been on a songwriting tear since then. Stills, not so much, but at least he's been musically revitalized playing with his new blues rock band, the Rides. CSN had so much good material in their last couple of years together that I had enough material to make an album that could have been released in 2014, and another that could have been released in 2015. Here's the link to the 2014, by the way:

Crosby released a new album in 2014, and another in 2016, and he's gone on to release new ones in 2017 and 2018 too! That's remarkable, because for pretty much the entire existence of CSN, he was the least prolific songwriter. Stills released an album with the Rides in 2013, and another with them in 2016. Graham Nash has only released one album in that time frame, in 2016. But that's strange to me, because he played enough new songs in concert for at least another new album in that time.

The bottom line of all that is that I had plenty of new songs to choose from. Even making two albums from this time period, I was able to be picky, and choose the songs I liked the best. I ended up going with three Stills songs, three Crosby songs, and five Nash songs. I could have chosen many more Crosby songs in particular, but his recent rash of new albums are all good, and I didn't want to detract to much from those. The reason I chose more Nash songs is because he's written some really good ones that he still hasn't put on album. Or, in one case, "Watch Out for the Wind," the song was only released as a hard to find bonus track.

All the versions here are officially unreleased, except for that Nash bonus track I just mentioned, plus one song from Stills. That's the first one, "Don't Want Lies." Again, I didn't want to step on the material from his studio albums with the Rides, but for their 2013, he put a rocking version of that song on the album proper, and then included a more CSN-esque acoustic version as a bonus track only. So, naturally, I used that bonus track version.

The bottom line is, one could easily imagine an alternate universe in which CSN really did get their act together to release one last really good album before breaking up. Heck, if you pick the best of my 2014 album "Back Home" and this one, it could have been a truly excellent one. But even though that didn't happen in reality, we at least can make it happen through reconstructions like this one.

Believe me, the songs on this album aren't as good in total as, say, the songs on CSN's first album in 1969. But they're significantly better than the actual albums CSN and CSNY put out from the late 1980s onwards. Even though CSN were turning into senior citizens in these years, they still had "it" both in terms of songwriting and singing. In my opinion, that makes their 2015 break-up that much more frustrating.

I suppose I could continue making more CSN albums out of post-2015 material. But I'm going to pass on doing that, at least for now, in part because they seemingly have broken up for good, but also because their recent solo albums are generally good enough for CSN fans to want to listen to all of the songs on them, as opposed to only picking and choosing some good songs from each one, as was the case since around the early 1980s.

UPDATE: On February 18, 2020, I found a Stephen Stills song I previously missed, "Look Each Other in the Eye." It's from 2016, which is a bit outside the time frame of this album. But it's an Internet only single release that doesn't fit anywhere else, so I've stuck it on the end.

For the album cover, I found a CSN concert poster. I don't know the year, but I'm guessing it's from the last couple of decades, despite the fact that the artwork relates to the "Wooden Ships," idea, from their 1969 song of that title. I made some edits and crops so the rectangular artwork would fit for a square album cover. I also added the text at the bottom. I like to imagine that the artwork matches the title, in that the people on the ship should "watch out for the wind" that the sea goddess is about to blow their way. :)
Posted by Paul at 2:55 AM