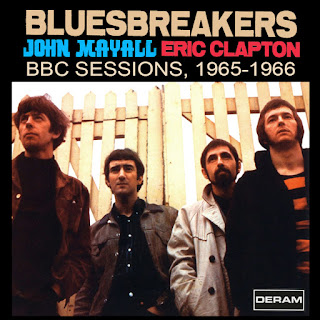 In March 1965, Eric Clapton left the Yardbirds because he felt they were becoming too poppy and commercial, and he wanted to play the blues. He joined John Mayall and the Bluesbreakers one month later, and stayed with them through July 1966. The best result of Clapton's time with the Bluesbreakers is the 1966 album "Blues Breakers with Erlc Clapton," also known as "The Beano Album."

But they recorded a lot of other music too. Nearly all of this was released as bonus material on the deluxe edition of that album in 2006. However, I felt the way that extra material is presented is not ideal. Extra studio tracks, live tracks, and BBC tracks were all put on one long bonus CD, mixed together without much logic.

So instead, I've split that extra stuff into two albums. This one contains all the BBC material, and the other one contains the rest. When I originally posted this four of the BBC performances hadn't been officially released, but existed on bootleg. Since then, they've been released as part of the mega-box set "The First Generation." So I've updated this album with those versions (even though the bootleg versions have the same sound quality, to my ears.) I've slotted those in chronologically with the others.

Thankfully, there are no instances of BBC DJs talking over the music this time around. So I didn't have to do anything except compile the songs. I suspect that's because the sessions were not for the usual pop-oriented BBC shows - one of the shows they did was called "Jazz Beat." It seems the DJs for those shows were more respectful of the music.

Note that John Mayall has had a long career, both before and after Clapton's relatively short time with his band, the Bluesbreakers. Personally, I'm not a fan of Mayall. His harmonica playing is pretty good, but his vocals and songwriting are just okay. So I'm mainly interested in Clapton's involvement. Thus, I've only included the songs that feature Clapton. (At this point in his career, Clapton just played lead guitar and didn't sing lead vocals.)

This is a relatively short album, only 31 minutes long.

For the cover art, I started with an alternate cover to the "Beano" album that was released only in certain markets, and inverted the colors. I liked how it looked. Then I replaced the photo with another one of the band. Finally, I fiddled with the text some, moving parts around and adding Clapton's name and the BBC title.
Posted by Paul at 7:13 PM