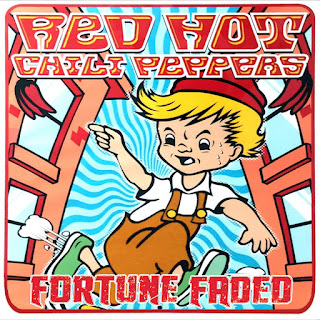 A couple of days ago, the Red Hot Chili Peppers announced that their lead guitarist Josh Klinghoffer left the band and will be replaced by John Fruiscante. It's the second time Fruiscante has rejoined the band. I consider this very good news. Klinghoffer was good, but Fruiscante was a key songwriter for the band's best albums, including "Blood Sugar Sex Magik," "Californication," and "Stadium Arcadium." In celebration of that, I'm posting more from the band.

In 2002, the band released the album "By the Way," which was followed by "Stadium Arcadium" in 2006. In my opinion, they definitely should have released an album in between, in 2003 or 2004. Actually, the band planned to release an album around then, and recorded more than enough material. They recorded at least 16 new songs, but guitarist Fruiscante vetoed putting them out as a new album, saying that his style and musical tastes had changed, and he wanted the band to go in a different direction. Apparently, only four of those songs have been released. "Fortune Faded" and "Save the Population" came out as part of a new "Greatest Hits" album, and "Bicycle Song" and "Runaway" were released as bonus tracks for the 2002 album "By the Way." The rest apparently remain in the vaults and even the song titles aren't known. One band member said a few years ago that he hopes the "lost album" will be released someday.

However, despite the fact that I don't have the vast majority of those songs, there are many more songs from that time period that are publicly available. In fact, there are so many that I'm posting this album of songs mostly from 2002 (only two of them are from 2003), and later I'll post another album of songs from 2003 to 2004. (That one includes "Save the Population," in case you're wondering why it's not here.)

Every single song on this album has been officially released. There's "Fortune Faded" from the "Greatest Hits" album plus the two bonus tracks mentioned above. All the rest are B-sides for "By the Way" singles, plus a B-side to a "Fortune Faded" single.

Personally, I think the band was in a very good creative phase at this time, so these are a pretty solid bunch of songs. A lot of them were good enough to go on an album like "By the Way," and it was probably just quirky opinions of this or that band member that caused some of the strong songs to come out as B-sides and the like instead.

For the cover art, my first instinct was to use the cover to the "Fortune Faded" single. But it turns out it's a terrible cover, with just the band name and song title printed on a solid white background. Instead, I found a concert poster from 2003 that I really liked. I squished it vertically some so more of the artwork would fit, and I added the words "Fortune Faded" at the bottom.
Posted by Paul at 10:14 PM