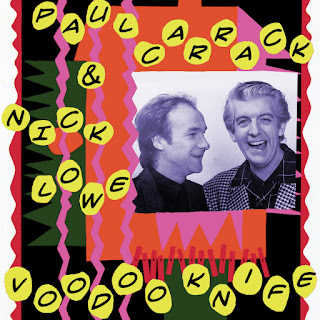 Here's a type of album I almost never do. Some people like to compile albums that never existed, such as picking the best of the Beatles' solo songs to create albums they might have recorded had the Beatles stayed together after 1970. With a few exceptions, such as some of my Crosby, Stills, Nash (and/or) Young albums, I try to stay more grounded in what actually happened. But I'm going to break that rule and make another speculative album.

In 1982, Nick Lowe recorded and released his first true solo album without Rockpile, "Nick the Knife." Also in 1982, Paul Carrack recorded and released his second solo album, "Suburban Voodoo." At first glance, the two albums seemingly have nothing to do with each other. But actually, they're so closely related that I've taken the best songs from both and made one album out of them. I've even combined the two album titles to create the title "Voodoo Knife." It's nonsensical, but it works for me.

So why the heck did I do this? For starters, the exact same band, Noise to Go, which included both Lowe and Carrack, played on all the songs for both albums. Lowe also produced Carrack's album. Furthermore, he wrote or co-wrote six of the songs on it. These two albums were the start of a fruitful collaboration between Lowe and Carrack. From 1982 to 1985, they did all their concert tours together. Lowe had just spent the previous four or five years collaborating with Dave Edmunds and the rest of the band Rockpile, so this was kind of Rockpile 2.0, with Carrack replacing Edmunds.

Furthermore, the two 1982 albums sound united. An AllMusic.com reviewer noted that Carrack's album "sounded very much like a Lowe album with Carrack singing." A Trouser Press reviewer similarly noted that Carrack's album "sounds like the souled-up flipside of 'Nick the Knife' - if anything, it's better. Yet it succeeds because of Lowe's production and composing presence, which complements Carrack's excellent voice with the kind of pop smarts that bring out his best."

On top of all that, both Lowe's and Carrack's albums had a bunch of excellent songs on each album, as well as a few duds on each. If one combines the two albums together, one gets all the good songs while jettisoning the rest. I think Lowe's 1977 album "Jesus of Cool" (a.k.a. "Pure Pop for Now People") and his 1979 album "Labour of Lust" are brilliant five-star albums. By combining the best of Lowe's and Carrack's 1982 albums, I think one gets an album that is very much at that same high level, and in the same rocking, catchy vein.

In putting this album together, I discarded three Lowe songs ("Let Me Kiss Ya," "Zulu Kiss," and "From Now On") and five Carrack songs ("I'm in Love," "What a Way to Go," "So Right, So Wrong," "Call Me Tonight," and "I Found Love"). Note though that Carrack also covered "From Now On," a song Lowe wrote, so it's included here as the Carrack version.

The end result is an album that's 42 minutes long, which is an ideal album length for that era. Lowe and Carrack both get seven songs. Personally, I think that if they'd combined efforts, they would have had a classic album that was a big seller. Instead, their separate 1982 albums just did okay, with the bright spot being Carrack getting a US Top 40 hit with "I Need You" (a song Lowe co-wrote, by the way). I've started the album with "Always Better with You," because that song is on my short list of songs most deserving of being a huge hit if only they'd gotten the right promotion and exposure and so on. It sounds very much like a 1960s Motown hit to my ears.

The cover art took a lot of work for me to do. Basically, I started with the cover of Carrack's "Suburban Voodoo" album. But I did a lot of rearranging with the yellow circles and new text to fit the new artist names and the new album name. I also removed the photo of Carrack in the middle and replaced it with a photo of Lowe and Carrack together, from around 1982. Unfortunately, I couldn't find any good color photos, so I tinted this one blue.
Posted by Paul at 12:25 AM