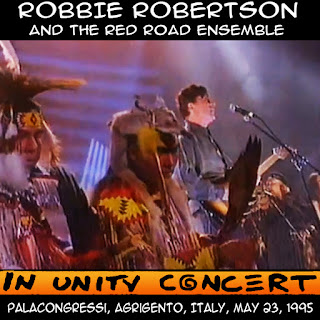 Robbie Robertson was the main songwriter for the Band, but almost never the lead vocalist. He put an end to that group in the late 1970s and started a solo career in the 1980s in which he's been the singer. Some people don't like his limited voice, but I think he sings with lots of character, much like Leonard Cohen.

To be honest, it seems to me that Robertson has never gone all out with his solo career. His solo albums have been really good, but there are long gaps between releases. Also, he's almost never played live, after playing live quite a lot with the Band. Occasionally, he's played one or two songs here and there for TV appearances, but he's never gone on tour and he's never even played a single full concert.

He's never done a full concert, that is, except for this one. In 1994, he released his third solo album "Music for 'The Native Americans.'" His mother was a Native American who lived much of her life on a Canadian reserve. That album was all about him getting in touch with his Native American heritage, with songs on that theme and many Native American guest musicians too.

This concert is basically a live version of that album, which works for me, because it's my favorite of his solo albums. Robertson sings a majority of the songs and plays lead guitar on most of the rest. But he brought out most of the same Native American guest musicians who had been on the album, and gave them more of a chance to shine, playing a few songs not on Robertson's album. Most notably, this includes Buffy Saint Marie, a Native American who has had a long successful music career, and she sings one of her best known songs.

I'm not sure what the deal with this concert is. It took place in a small town in Sicily, in the south of Italy, which seems an odd location given the Native American theme. It was filmed for TV, and I got the music by converting the video feed to mp3s. The footage credits reveal there was an all-Italian film crew who recorded the concert for an Italian TV station. It's strange to me that the only full concert Robertson has done in his solo career so far took place in those conditions, but perhaps TV stations in other countries weren't interested in recording similar shows.

By the way, "Coolidge" is a musical group composed of Rita Coolidge (who had some country hits in the 1970s and 1980s), her sister Priscilla Coolidge, and her daughter Laura Satterfield. A couple of years after this, they changed their name to Walela and released a few albums of Native American-inspired music.

The concert is available on YouTube. I took a screenshot of it for the cover art. I took another screenshot for the "In Unity Concert" title.
Posted by Paul at 2:04 PM