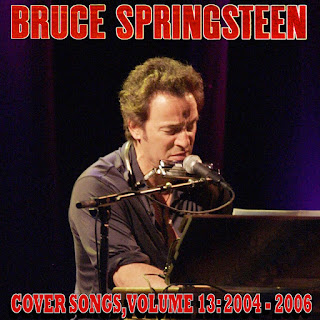 In 2004, Bruce Springsteen took part in the "Vote for Change" concert tour, in which a bunch of famous musicians performed in an effort to promote the election of John Kerry for in the 2004 presidential election. As a part of this tour, Springsteen took part in duets with some big names. The first three songs are examples of that, as well as the last two songs on the previous album in this series (where he played with John Fogerty on one song and Neil Young on another).

There are more songs from 2004, and a few from 2005, where Springsteen generally did his usual covers of classic rock and soul hits.

But then, in 2006, he shifted gears dramatically, and went back into a "folkie" mode. He released a studio album called "We Shall Overcome: The Seeger Sessions," which was composed entirely of folk songs previously performed by Pete Seeger. Since those are cover songs, they naturally will get on this series. The last four songs here are from that project. But these are all live versions, so these are different versions than the one on that studio album.

In terms of sound quality, this album is a mixed bag. Only four of the 13 songs have been officially released. The rest generally sound excellent, from soundboard bootlegs. But there are a couple of exceptions of somewhat rougher sound, such as "Running on Empty" and "It Takes Two."

For pretty much all the cover art photos in this series so far, I've shown Springsteen playing a guitar. So, for variety's sake, this time I've gone with him playing a piano in Dusseldorf, Germany, in 2005.
Posted by Paul at 8:01 PM