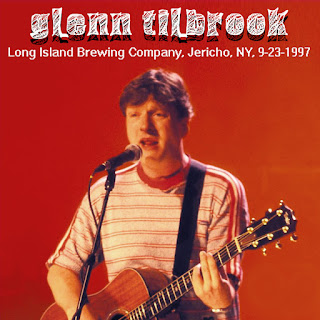 So far, I haven't posted any music by Squeeze. But I definitely plan to, because I like them a lot, especially their work from their first decade or so. This is a solo acoustic concert by Glenn Tilbrook, the main singer and one of the two main songwriters for Squeeze. So if you like that band, you're bound to like this.

But this is a different than the usual Squeeze music, for two reasons. First, the solo acoustic format means the music is presented very different when Squeeze hits are being played. But also, in 1997 when this concert took place, Squeeze was mostly dissolving - they would put out an album in 1998, and then not put out another one of new material for nearly 20 years. Yet Tilbrook hadn't really gotten his solo career started either - his first solo about wouldn't be released until 2001. As a result, he played a lot of cover songs.

I count eight covers, and they're an interesting bunch. He did songs by Blur ("End of the Century"), Oasis ("Wonderwall"), the Beatles ("Tell Me Why" and "Ticket to Ride"), the Monkees ("Daydream Believer"), and Elvis Costello "Alison"), as well as the 1950s hit "Sea Cruise." So that adds a lot of fun variety, instead of it being all Squeeze songs.

In terms of sound quality, this is excellent. It's a pristine soundboard. At the time, Tilbrook wasn't well known on his own (and he never really has drawn huge crowds as a solo aritst), so this took place at an intimate club, with lots of interaction with the crowd.

I made one rather odd but significant edit. For the song "In Quintessence," he played a guitar solo in the middle of the song. But he screwed it up, and apologized for his mistake at the end of the song. Then, once the applause ended, he played the solo he'd wanted to play. That's kind of strange, having a solo wtthout a song around it. Since the solo in the song was flubbed, I patched in the good one he played after the song ended. From your point of view as a listener, you should just hear a normal song with a perfectly good solo in it.

For the cover art, I wanted to find a good photo of Tilbrook in concert in 1997, but i couldn't find any. However, I found one of him in concert in 1996, so I used that. He was standing next to Chris Difford of Squeeze, but I cropped that out. And by the way, he apparently was standing in front of some red wall. I didn't make any changes to the pic.
Posted by Paul at 4:59 PM