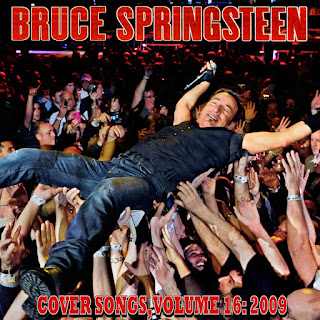 Here's yet another Bruce Springsteen covers album. As I mentioned in the last post in this series, 2009 was a big year for Springsteen doing covers of songs he'd never played before. That's so much the case that all the songs here are from that single year.

But also as I mentioned in the last post, most of those covers were only played a single time, usually due to a fan request. That can be a problem in terms of sound quality, since the odds of an official release or a really excellent bootleg from a single concert are low. As with this series as a whole, I've maintained pretty high sound quality standards. That meant not including some songs if the sound wasn't up to snuff.

Only four of the 15 songs were officially released. So this album sounds a bit rougher than most others in this series.

By the way, the story behind the performance of "All Shook Up" here is pretty funny. Springsteen started to play the song, as usual, except it turned out an Elvis Presley imitator named the Philly Elvis was in the front of the audience. Somehow, he found himself on stage, and Springsteen was nice enough to let him sing part of the song. The whole thing happened spontaneously, which is why Springsteen comments at the end that he didn't know how the heck that had just happened. You can find a video of it on YouTube. It's entertaining to watch the looks of amazement and amusement on the band members on stage.

One again, for the album cover, I wanted to go with something a little bit different. I found a great photo of Springsteen "crowd surfing" in Baltimore in 2009.
Posted by Paul at 2:27 PM