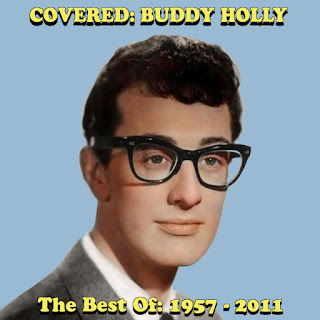 The last 1950s artist I want to deal with is Buddy Holly. He hit the big time in 1957, but died in a plane crash just two years later, in 1959. Since he was only 22 years old when he died, one has to wonder at all the music he could have done if he'd lived.

Holly was a particularly big influence on the Beatles. In fact, the name "the Beatles" was inspired in large part by the name of Holly's backing band, the Crickets. (The name for the Hollies was even more directly inspired by Holly, by the way.) But what perhaps influenced the Beatles the most was the example of Buddy Holly being a singer who wrote most of his songs. (Chuck Berry was the other big 1950s example of that.)

With that in mind, I wanted to include Holly in my "Covered" series to highlight the songs he wrote or co-wrote. It turns out he didn't write some of the songs that are closely associated with him. For instance, he did NOT have a role in writing any of these songs:

I was disappointed to learn he didn't write those, even though he was the first artist to release most of them. But he did write lots of good ones, including some all-time classics. Not many covers of his songs have been big hits, though there have been some. So I mostly picked covers that I liked the best. I generally included versions of his best known songs, but I included a few rarities, usually because I found some interesting versions of those.

The total length of the album is 46 minutes, and I only have one album for him. I could have made it considerably longer, but I wanted to keep the quality control high.

I'm amazed that I wasn't able to find a single good color photo of Holly. I did find a few, but they were all lacking for one reason or another, such as showing him as part of a group, so I couldn't show just his head without zooming way in and having a drastic loss of picture quality. Since I hate using black and white photos, I resorted to using a colorized photo of him. I think it's a particularly good one, so it's hard to tell, but it is colorized.
Posted by Paul at 7:00 PM