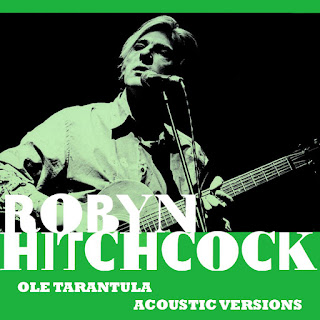 If you've been keeping track of my Robyn Hitchcock posts, you've probably noticed that I like to post an acoustic version for each of the studio albums he's released. This is that sort of album for his 2006 release, "Ole Tarantula."

The challenge for me with this sort of album is finding an acoustic version of each song with good enough sound quality. This time around, I was able to find seven out of the ten songs from "Ole Tarantula." (Chances are, the others were never played live at all, or weren't played in acoustic format.) But I was able to supplement that with more more songs that are acoustic versions of stray tracks from the same year.

Every single performance here is officially unreleased. But the sound quality is pretty high, generally speaking. It helps that a few of the songs come from in person radio station appearances instead of concerts. Most of the rest comes from soundboards. As I often do, I've removed the audience noise to make it sound like studio recordings.

For the album cover, I found what appears to be an advertisement for "Ole Tarantula." I removed all the text from below Hitchcock's name and added in the text I wanted. But it's otherwise unchanged.
Posted by Paul at 3:47 PM