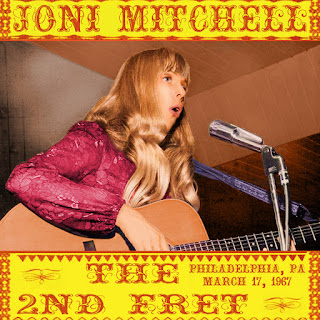 So far, I haven't posted much of Joni Mitchell's music. But she's one of the all-time greats, in my opinion, and I'm going to post a lot more, starting here.

Mitchell has taken a "don't look back" approach to her musical career, She's released almost nothing of an archival nature, especially when it comes to her early career. That's understandable in that her early years (the 1960s through mid-1970s) are seen as the most popular and critically praised part of her career. She's probably wanted to deemphasize that in relation to her more recent works. Very little of her studio work has been leaked to bootlegs as well.

Thus, when it comes to non-official stuff, we pretty much just have her live performances. I've already compiled two albums of mostly original songs from her very early years that never were officially released. You can find those here:

Just today, I revised both of those albums and their mp3 downloads, due to new information I found out in getting some Mitchell concerts ready to post, so you might want to re-download them if you have them already. I didn't change much in terms of the music, but I've changed the mp3 tags for most of the songs on both albums.

Another way, maybe in addition to those compiled albums, to enjoy her very early music is to listen to some full concert bootlegs. It so happens that there are a number of excellent sounding soundboard recordings from 1967 and 1968, even though she wasn't that popular yet. In fact, we have more pristine sounding concert bootlegs from early years than most later years when she was many times more popular.

The main reason for this lucky break is due to one man: Gene Shay. He was a folk music DJ in Philadelphia back in those years, and he was an early promoter of her music. He had her play live on his radio show several times in 1967 and 1968, though only for a few songs each time. More importantly, he also recorded a bunch of her concerts, apparently using professional equipment, and with Mitchell's permission. I'm not sure how much he recorded, but all or some of her concerts from four different nights - all at the 2nd Fret in Philadelphia - have leaked to the public. So I'm starting my posting of Mitchell's concerts with those.

It's widely believed that the first of these concerts dates to November 1966. Heck, there's even a grey market release in Europe of that concert, and it has that year in its name. I made that mistake when I put together those two stray tracks albums mentioned above. (I have since fixed that error.) But I looked deeper, and it turns out that all of the songs from that bootleg are exact duplicates of songs from other 2nd Fret bootlegs in 1967. So ignore that one. Since that one effectively doesn't exist, that means the first of these excellent concert recordings comes from March 17, 1967.

Or maybe not! The recording includes two sets of about thirty minutes each. It seems nearly certain that both sets are complete, because both start with an announcer introducing Mitchell, and the between song banter and other clues indicate both sets are complete. However, the two sets might be from different nights, because in the second set she apologized for playing two songs she did in the first set, and yet those songs weren't played in the first set of this recording! But Shay played them on his radio show after she became more famous, and he believed they were from March 17, 1967, so who knows. Perhaps she did three sets, or they're from two nights close to each other, or something like that.

I'll assume both sets are from March 17, 1967, until evidence suggests otherwise. For what it's worth, her official website jonimitchell.com has an extensive concert date database, and that lists these songs as being performed on March 17, 1967. But that doesn't clear up in there was an unrecorded first set or something like that.

Regardless, the bottom line is we have a full hour of recorded live music from her, that sounds just as good as many professionally recorded officially released albums at that time. The recording was not without its flaws. But I went through each song, as well as the plentiful between song banter, and I think I fixed most of the issues. The main problem I noticed was that songs often started loud but then got quiet by the end of the song, when you'd expect the volume to stay roughly constant for the whole song. This happened many, many times. My guess is that Mitchell was fairly new to performing with a microphone, and started each song singing right into it, but then forgot and started to lean away from it. It wasn't a huge effect, but it was there. Luckily, it was easily fixable by gradually boosting the volume for the later portions of the affected songs.

One great thing about listening to these early recordings is that Mitchell was very chatty between songs, talking extensively before almost every song, sometimes for several minutes at a time. One can learn a lot about her, and her songs, from listening to her entertaining dialogue. The downside is that there were some volume issues with that banter as well, usually because it was too quiet. It seems clear that at times she spoke off mike, and the volume went way down. But that also was very fixable just by adjusting the volume levels.

Mitchell has played most of her songs in unusual alternate tunings, going back to the very start of her musical career. That's great, but a downside to that is that she was forced to spend an unusually long time between songs tuning her guitar to change from one tuning to another. I've eliminated most of that, unless she was talking at the same time. That shaved a few minutes off the length of the recording.

This bootleg has been widely available for a long time. But I believe I've made it sound better than ever before, simply by carefully adjusting the volume and eliminating some dead air tuning time.

I've recently made edits and improvements to all four of the 2nd Set concerts recorded by Shay. So I plan on posting all three of them over the next few days.

Unfortunately, there are no known surviving photos of Mitchell playing at the 2nd Fret. (The jonimitchell.com website is extremely thorough, and they don't have any.) In fact, there are very few photos of her playing on stage from 1967 at all, and the good ones are all in black in white. I've used the closest good one I could find, from a Mariposa Folk Festival in August 1967. Since I generally dislike black and white photos, I've colorized it.

Also, thanks to that jonimitchell.com website, I was able to find a concert advertisement for Mitchell playing at the 2nd Fret in 1967. I used that for the top and bottom portions of the cover art. I did some tweaking, but I didn't change that much. For instance, I replaced all the text for better clarity, but I used the exact same font, with the same words in basically the same sizes and locations, except I changed the date and I added a mention of "Philadelphia, PA."