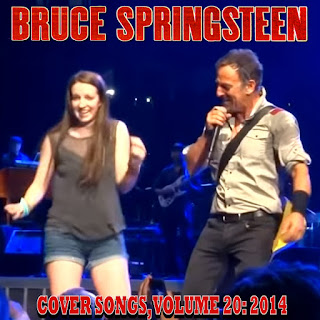 All of these Bruce Springsteen cover songs albums are great in terms of musical content. But this one at least is tied for the very best sound quality out of all the albums in the series, so if you're looking for one album to get a sense of what this series is about, this is an ideal one to start with.

The reason the sound quality is so good is because all of the songs have been officially released. As I've mentioned previously, Springsteen has released dozens of concerts in recent years, but they're download-only and fairly obscure. For some reason, he's probably released more from 2014 than any other year, so it's a breeze for me to pick songs with high sound quality.

Now, as for the content, Springsteen does some really unexpected songs here! Typically, he's played loads of classic soul and rock hits, especially from the 1960s. For instance, he's done just about every "frat rock" hit there is, and that's exemplified by his cover of "Louie, Louie" on this album. But for this album, he did a version of "Stayin' Alive" by the Bee Gees, of all things! And just as strange, but in a different way, is his cover of Lorde's huge 2013 hit "Royals." What makes that unique is that he's almost always covered songs from decades past, but that song was only about a year old when he covered it. (I'm glad he did, because I think it's a great song.)

The first half of the songs here are from a tour of Australia and New Zealand, and many of these unexpected song choices are him tipping his hat to those countries. For instance, the Bee Gees grew up in Australia, so he played "Stayin' Alive" there. Similarly, he did "Friday on My Mind" as a tribute to the Australian band the Easybeats, who wrote it. And Lorde is from New Zealand, so he played "Royals" there.

One reason Springsteen has a legendary reputation as a concert performer is his interaction with the audience. For this album cover, I chose a photo that would exemplify that. The photo is of a random girl who was invited to the stage to dance with him in 2014.
Posted by Paul at 6:01 PM