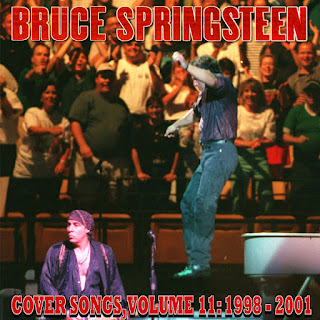 In the last volume in this Bruce Springsteen cover songs series, Springsteen was frequently in acoustic mode. For this album, he went back to rocking out. This coincided with the first significant touring he did with the E Street Band since about 1985.

Note that I already posted a version of the song "In the Midnight Hour" earlier in this series. But that version was just Springsteen, whereas this version is a duet between him and Wilson Pickett. Speaking of duets, you may have noted some of those on previous volumes of this series. This one has more than any before, with eight out of the 13 songs being duets. Some are with band members, such as his wife Patty Scialfa. But more and more, other artists wanted to collaborate with him. So you'll see many more duets before this series is finished.

George Harrison died in 2001. That's why you see Springsteen paying tribute to him with covers of two of his songs, "Something" and "My Sweet Lord."

In terms of sound quality, surprisingly, just like the last album in this series, every single song is officially unreleased. That means that some of the songs sound a bit rough. Most of them come from soundboard recordings, but a few come from audience recordings. You can usually tell by the loud cheering over the music. "Jambalaya" is a particularly bad case of this, and I almost left it off, but it had an overall clarity that made me decide to include it. The two Harrison songs and a couple others have similarly rough sourcing.

For the cover art, there are so many albums in this series that I didn't want to repeat some standard thing, such as Springsteen standing there with a guitar. So I went with this rather strange photo of Springsteen jumping off a piano. Judging from the height of Steven Van Zandt standing by, I'd guess he was about five feet off the ground when he jumped.
Posted by Paul at 10:40 PM