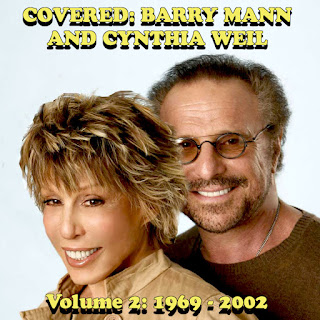 Here's the second and last of my Covered series collection for legendary songwriters Barry Mann and Cynthia Weil.

If you look at this song list as well as the song list for Volume 1, I think the sheer diversity of songs is remarkable. A lot of songwriters or songwriting teams in this Covered series have a certain style or sound, so you often can tell if a song is written by them. Not so with Mann and Weil. There's no way I could have imagined these songs had anything in common, because they don't, except for who wrote them.

Mann and Weil have shown a remarkable ability to survive changing trends. They continued to write hits from the start of the 1960s all the way to end of the 1990s. That said, I'm not a big fan of some musical trends from the late 1970s onwards. That means there are a higher number of songs Mann and/or Weil wrote from that time onwards that I don't like, even some big hits. In particular, they had some cheesy "adult contemporary" hits I can't enjoy at all. For instance, "How Much Love" by Leo Sayer, "Just Once" by Quincy Jones and James Ingram, "I Will Come to You" by Hanson, "Love Will Conquer All" by Lionel Richie, "Through the Fire" by Chaka Khan, "Running with the Night" by Lionel Richie, and more. I can enjoy a totally cheesy song if it has something special about it, such as a great melody (for instance, "Sometimes When We Touch" by Dan Hill, which is included here), but more often, I find those sorts of songs quickly forgettable, and almost interchangeable.

I wasn't going to include "Somewhere Out There" by Linda Ronstadt and James Ingram, because I consider it also in this category of cheesy pap. But that song was such a massive hit, including winning the Grammy for song of the year, that I figured I couldn't really have a compilation of Mann and Weil without it. There are a couple other songs like that on this volume that I reluctantly included. Basically, I think a lot of popular music has gone astray in recent decades, and unfortunately Mann and Weil wanted to keep writing hits, so they followed those unfortunate trends. That said, I think most of the songs here are very good, showing why the two of them are considered one of the most famous songwriting teams of all time.

Thank goodness that I was able to find a decent color photo of Mann and Weil this time around. There are lots of photos of them since about 2010 onwards, but I wanted a photo of them before they were senior citizens. This photo is undated, but I'm guessing by their looks in comparison to other photos of them I've seen that it was taken in the 1990s.
Posted by Paul at 2:18 PM