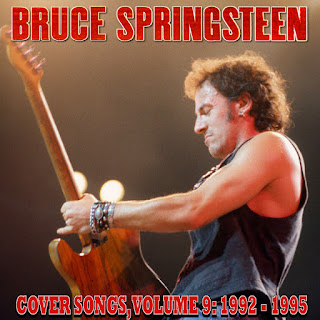 Your daily dose of Bruce Springsteen cover song albums continues. I don't have anything from 1991, because Springsteen didn't tour that year and only made a few guest appearances at small clubs. So it's on to 1992 through 1995.

Only four of 12 songs are officially released this time around. But the unreleased tunes have pretty good sound quality all the way through.

Note that "Ninety-Nine and a Half (Won't Do)" is a famous soul song written by Wilson Pickett and others in 1966. The song Springsteen sings here bears only a faint resemblance to that, mainly the title. There's an older gospel song with that same title. I listened to that, and I don't think it's that song either. How many songs with that rather strange title are there?! If anyone can clarify what this is a cover of exactly, I'd appreciate it.

So far on these covers albums, Springsteen stuck to doing well known classic rock and soul hits. But on this album he veered into country and folk some, especially with the obscure 1959 Louvin Brothers song "Satan's Jeweled Crown," as well as the traditional "Lonesome Valley." He would dive full on into folky music for his 1996 album "The Ghost of Tom Joad."

On a different note, I made a drastic edit to the version of the Bob Dylan song "Knockin' on Heaven's Door" here. This was performed by Springsteen and Wolfgang Niedecken & His Leopardefellband. (I have no idea what that rather obscure German group got so lucky.) It went on for several more minutes, which I thought was too long. There were some sound glitches too. So I cut out the segment of the song with the sound problem, and cut out a verse sung in German by Niedecken for good measure. The song still ends up being six minutes long after those edits.

By the way, there's an interesting story behind the cover of "Come Together." In 1994, the Rock and Roll Hall of Fame was having a big concert in New York City, which I think was shown on TV. Elton John and Rod Stewart were supposed to perform a duet of the song in tribute to John Lennon, who was going to be posthumously inducted into the Hall of Fame as a solo artist. But there was an earthquake in Los Angeles that day where Stewart lives, and he was unable to fly to New York. The organizers searched at the last minute for some other big name to sing the song, and begged Springsteen to do it. But he turned them down multiple times. Finally, with time running out, he and Axl Rose agreed to do a duet of it. But due to the lack of time, they didn't have a chance to practice it, and only managed to look at a lyric sheet and divy up who would sing what. It may not be the best performance in the world, but I've gotta give them kudos for having the guts to wing it like that.

The cover art photo shows Springsteen playing in Paris in 1992.
Posted by Paul at 11:58 PM