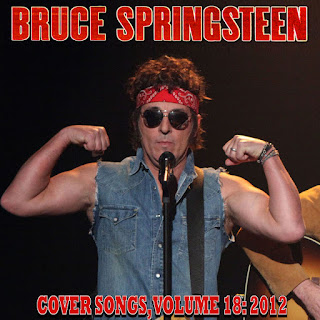 Even though it's Christmas Eve, the daily posting of Bruce Springsteen cover songs albums continues without pause. This album deals with just the year 2012.

This album is much like the others in the series, with the usual emphasis on covers of classic rock and soul hits from the 1960s. This time, only two out of the 12 songs have been officially released. Still, the sound quality is generally excellent.

Probably the worst song in terms of sound quality is "When I Leave Berlin." But I included it because it's such an unusual song for Springsteen to cover. Plus, even the sound quality on that one is acceptable. The song was written by the rare obscure British folk musician Wizz Jones, and first appeared on a 1973 album by him.

In 2012, Springsteen had one of several appearances on The Jimmy Fallon Show in which he parodied his "Born in the U.S.A." era self. As a lark, I've used a photo from that appearance as the album cover. Fallon can be partially seen to the side, dressed up like Neil Young.
Posted by Paul at 8:37 PM