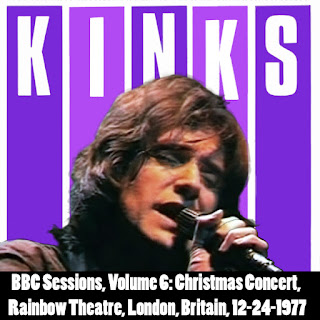 I'm continuing to post a series of what I consider are the best Kinks concert recordings. The emphasis there is on "recordings," because the Kinks were usually very good in concert, but only rarely were entire concerts recorded at the very highest sound quality.

It so happens that 1977 saw two such concerts, one right at the beginning of the year, and the other right at the end. I've already posted one, which you can find here:

It so happens that the two 1977 concerts have fairly different setlists, so I think it's worth it to post both of them. This second concert was performed on Christmas Eve, so it's widely known as the "Christmas Concert." It was recorded for the TV show "Old Grey Whistle Test," and shown on BBC TV at the time. (The Kinks played some other songs for that same show in March 1977, and I've included those on one of my "At the BBC" collections.) Thus, I've included this in my BBC Sessions album series.

This is widely considered one of the best Kinks concert recordings. I've even seen it on a blogger's list of the best bootlegs of all time. The only downside is that it's a mere hour long, instead of the usual hour and-a-half to two-hour-long concert the Kinks did in those years. I'm guessing that's because the Old Grey Whistle Test had an hour-long format. I don't know if the Kinks played more songs that didn't make the show, but if they did, I can't find any trace of them anywhere.

Probably due to the time limitation, the Kinks put on a very tight concert, with relatively little talking between songs. In fact, several songs quickly follow each other, or even could be considered parts of medleys. I've separated what little talking there is onto separate tracks.

For the cover art, I used an actual screenshot from the concert in question, since it was shown on TV. The best image I could find shows just the head of Ray Davies, instead of the whole band. When I updated the album in February 2021, I stripped the black background behind Davies and replaced that with the same sort of background that I used in all the other BBC Sessions albums.