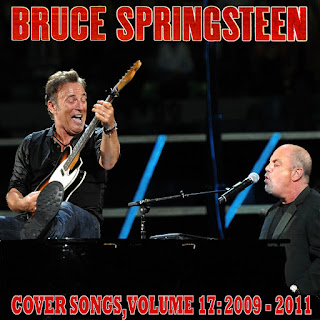 The daily Bruce Springsteen cover song series continues. We're all the way up to volume 17, dealing with the years 2009 to 2011.

Springsteen seems to have done an increasing number of duets with other famous musicians over the years. There are an unusually large number of those this time around. That's why I chose to make the cover of him with Billy Joel. They do the first two songs together.

Springsteen didn't tour in 2010 or 2011, yet the last six songs are from those years. That's because they were from surprise appearances at small clubs or special concerts. For instance, the last two songs are from a concert celebrating Sting's sixtieth birthday.

Only three of the 12 songs have been officially released. Unfortunately, some of the rest sound a bit rough, and clearly come from audience bootlegs instead of soundboards. The last two songs are examples of that. But I wouldn't include any song if it didn't meet my sound quality standards.

The cover art photo of Springsteen and Billy Joel was taken during a Rock and Roll Hall of Fame concert in 2009.
Posted by Paul at 11:04 PM