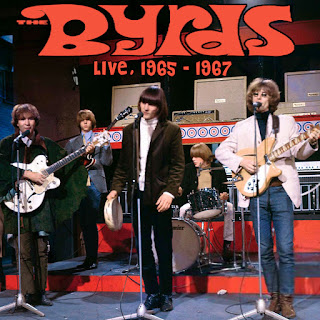 In my opinion, it's a tragedy that there is so little recorded of the Byrds playing in concert in the 1965 to 1967 commercial heyday, when they had all five original members. But "little" is not the same as "none," and this album gathers up the few live recordings from them that I've found.

The Byrds were extremely popular and influential during those years, with two number one hits and some other hits. As a result, they were shown on TV a lot. Unfortunately, most of the time, they simply lip-synced to their records. I think I've found all the cases where they actually played live on TV in those years, though in one case ("The Times They Are A-Changin'"), only the vocals were live, and the instrumental portion came from a backing track.

The good news is that there are so many songs performed live on TV. But in most cases, the recordings aren't that great. For instance, because the band was so popular, there's lots of screaming and cheering at the starts and ends of songs, and sometimes even in the middle. So please, if you listen to this album, be a little tolerant of the sound quality. Once again, we should be grateful there are these recordings at all.

Happily, there is one recording that is much better and cleaner. That's six songs that were recorded for a radio show in Sweden in 1967. These songs sound quite different because instead of the screaming and cheering with the other songs, there's no audience at all for those six. Also in contrast to the others, there's some talking from the band members before each song.

The album ends with three more songs from TV. Like the earlier ones, those have rougher sound quality.

By the way, I haven't included all the live performances from the original band, because I've skipped one key concert: the Monterey Pop Festival in 1967. The Byrds played a 22 minute-long set there that was recorded with great sound quality and has been officially released as part of a Monterey Pop box set. I haven't included that performance in part because it has been officially released, and I figured most fans who are into the Byrds will have that already. But also, by pure luck, there's almost no duplication of songs here, with only "Mr. Tambourine Man" being repeated. But if I included the seven Monterey Pop songs, literally every single one of those would be duplicates of songs here. Perhaps I could post that performance separately, if there is a demand for it.

Only one song featured here has been officially released. That's the performance of "Roll Over Beethoven" in the Swedish radio show. It appeared on the box set simply known as "The Byrds." However, I didn't use that version, since I wanted all the songs from the radio show to be from the same source. I would have used it if I thought it sounds better, but it sounds exactly the same as the bootleg version to my ears.

Oh, by the way, when putting this album together, I was pleasantly surprised to find that the Byrds did a version of Buddy Holly's "Not Fade Away." That's a song they didn't put on any album.

The cover art photo comes from an appearance on the "Ready Steady Go" TV show in 1965.
Posted by Paul at 9:12 PM