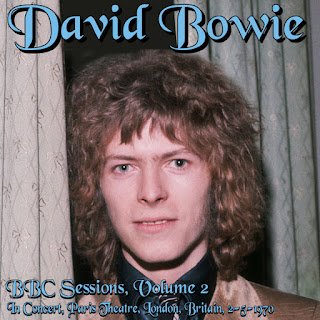 In February 1970, David Bowie had the opportunity to play a full hour for the BBC. The bad news is that when an official Bowie BBC compilation was finally released, it only included half of the show. The other half has been bootlegged (minus whatever talking there was between songs), but the sound quality of those songs are of noticeably lesser quality than the officially released ones. As of May 2021 though, the full version has finally been released, and with better sound quality, so I've replaced the previous version with that better one.

Note that the sound quality still has some minor issues. The BBC lost or destroyed the recording many years ago. Luckily, Bowie's producer at the time, Tony Visconti, taped the full show off the radio. That's still pretty good, but obviously there was some sound quality loss compared to the use of the master tapes. There especially seems to be a glitch in the last minute of "Wild Eyed Boy from Freecloud" where it sounds to me they used a lesser source to fix a troublesome spot.

Anyway, it's a great concert. It happened just two months after his 1969 album, variously called "Space Oddity" or just "David Bowie." He played every song from that album, with the curious exception of his one big hit, "Space Oddity." Perhaps he didn't want to be considered a one-hit wonder. He also played some older songs, and some songs that hadn't been released yet, including a cover, "Buzz the Fuzz," that he never released (until the 2021 release of this BBC show).

This is the only example of Bowie playing for so long for the BBC. The next album in this series will resume with him doing a few songs here and there each time.

UPDATE: On June 1, 2021, I updated the mp3 download file. A new official release called "The Width of the Circle" contained this full performance, in better sound quality than ever before. It's also ten minutes longer than previous versions, due to having a lot of talking between songs, much of which is from BBC DJ John Peel. Previously, I'd posted two different versions of this concert, for sound quality reasons that are moot now. Thanks to this newly available recording, I've simplified that down to just one version.

Regarding the album cover, I couldn't find any photo at this exact performance. However, I found a photo of him from that very month, while making an appearance at the Valentine Pop Awards, where he played "Space Oddity." The photo only went to the top of Bowie's head, but I used some Photoshop tricks to extend it a bit higher.