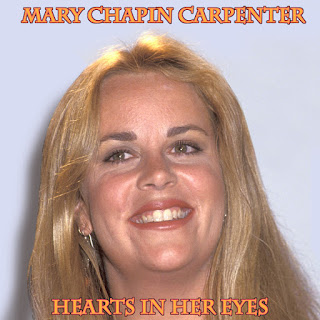 I posted a Mary Chapin Carpenter stray tracks album last week. I wasn't planning on posting another one soon, since I have so many other artists with albums that deserve posting. But I got a surprising number of positive responses to that post, for someone who isn't considered a "big name" artist, and I am influenced by feedback. So here's another one.

This album kind of frustrates me for the songs that Carpenter never officially released. There are four songs here that are taken from concert bootlegs and are still officially unreleased in any form, and they're all great. "Hearts in Her Eyes" was a song first done by the Searchers in 1979, long after their commercial heyday. The Searchers should have had a hit with it, but they were totally out of fashion in 1979. Based on this live recording, Carpenter definitely should have had a big hit with it. "Party Doll" is a song originally by Mick Jagger, put on one of his solo albums. Carpenter did release a version of it in 1999, and even named an album after it. But that was a ballad version. This is a rocking version, which is way better. "Train of Love" was made famous by Johnny Cash, and Carpenter nails that one too.

Finally, there's "Girls with Guitars." This song was actually written by Carpenter, so the fact that she's never released it in any version baffles me. Wynonna Judd covered it, and had a Top 10 country hit with it in 1994. Even so, Carpenter should have a least put it on an album. Based on this live version, I think her version would be much better than Judd's. I think it's one of Carpenter's very best songs.

The rest of the songs are all released studio tracks from B-sides, soundtracks, and the like. The sound quality is noticeably better on these than the four live songs from bootlegs. Some of them are cover versions, including an intriguing version of the huge 1960s hit "Downtown" where the tempo is slowed way down.

Personally, I like Carpenter's 1990s era the best. Most of the songs here are upbeat and similar in sound to her big hit album "Come On Come On." I think this is a really solid set of songs.

I've added "That's the Way Love Goes" as a bonus track. For once, it's not due to sound quality issues. Instead, it's because it's a duet between Carpenter and Shawn Colvin, and it's more vocally dominated by Colvin. So it probably belongs on a Colvin album instead. But I figured what the heck, why not include it as a bonus track here anyway.

UPDATE: On June 8, 2021, I updated the mp3 download file. I found a bootleg of her doing the Prince song "When You Were Mine," so I added that.

The cover art photo shows Carpenter at the 1993 Country Music Awards. I found some of the background distracting, so I erased the distracting bits.