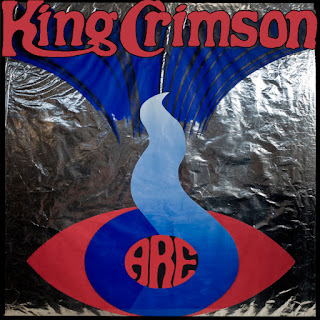 I have to admit that I'm not a big King Crimson fan. What I do love is their very first album, 1969's "In the Court of the Crimson King." Unfortunately, the membership of the band has frequently changed over the years, and that version of the band only released that one album before splitting up. So what I've tried to do is create a follow up album that comes close to the top level of that first album.

One could argue that the band's second album, 1970's "In the Wake of Poseidon," had many of the same band members on it, but that's only partially true. "In the Court of the Crimson King" was released in October 1969, and around the end of that year, band members Ian MacDonald, Michael Giles, and Greg Lake left, leaving only guitarist Robert Fripp. (Fripp would be the only constant in the band over its many iterations across the decades.) Lake went on to join Emerson, Lake and Palmer, and MacDonald and Giles released one album together, called "McDonald and Giles," before breaking up their duo.

The key band member in this situation, in my opinion, is Greg Lake. He was the lead vocalist for all the songs on the first album, and thus his distinctive voice was a key part of the band's sound. It seems Fripp realized this, because after Lake left, he was hired back as a session musician to sing most of the songs on "In the Wake of Poseidon." In my opinion, that album tried hard to repeat the formula of the first album, with a similar sound and often a track-by-track match. However, I also feel that it's not nearly as good. The songs were good, but it was essentially Fripp plus a bunch of studio musicians (including Lake) instead of a real band, with the cohesion and fire of the band from the first album.

Thus, what I've tried to do as much as possible is include recordings made while the original band was still in existence. Most of them are actually early versions of songs that appeared on "In the Wake of Poseidon." The good news is that King Crimson is a band that has decided to empty their vault of recordings, releasing dozens upon dozens of live albums, as well as lots of previously unreleased studio recordings. The band news is, when it comes to 1969 and 1970 material, nearly all of it sucks, due to sound quality issues. Just about all of the officially released live recordings from this time, for instance, would be considered poorly recorded audience-sourced bootlegs.

Luckily, there are a few high sound quality recordings here and there. Three of them come from a concert at the Fillmore West in San Francisco in December 1969, when the original band was still together. Another comes from a BBC performance from August 1969. There are three more songs on "In the Wake of Poseidon" that were written later or I couldn't find a good version. So I've resorted to using the versions from that album for two of them. The last one, "Cadence and Cascade," is the one song from that album that wasn't sung by Lake. But luckily Lake did sing a guide vocal at one point, and that version was eventually released as a bonus track. So I've used that version.

For a bonus track, I've included an interesting early version of the song "In the Court of the Crimson King" for the album of the same name. It's only downgraded to a bonus track because it repeats a song from that album. It's one of a very small number of songs played on the BBC by the original band with excellent sound.

In the Court of the Crimson King [Alternate Version] (King Crimson)

There's only one reason I've named this album "Are," and that's because of the cover art. I couldn't find any really good color photos of the original band. But I did find a very nice concert poster from that era. It was rectangular, as most posters are, but I simply squished the whole thing vertically and I think it works just as well. In addition to the band's name at the top, it only has one word on it, "ARE" in the middle. Thus, the album title. ;)

Perhaps there was meant to be more at the bottom, so the whole thing would say "King Crimson are..." something, but I found several versions on the same poster on-line, and none of them added anything else. Maybe it was just the arty weirdness of that era to leave the meaning of words rather mysterious. Also arty and weird is how parts of the poster seem to be made out of tin foil or something similarly metallic and shiny.
Posted by Paul at 10:15 PM