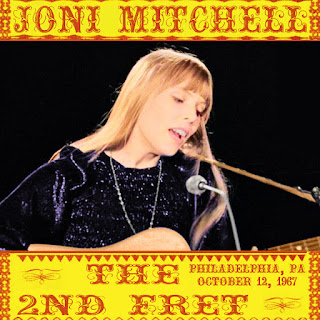 Yesterday, I posted what I said was a Joni Mitchell concert at the 2nd Fret in Philadelphia on October 11, 1967. Forget that concert entirely! If you downloaded it, please delete it! I've deleted that post altogether.

Boy, do I feel dumb and disappointed. As I was getting ready to post this concert, also from the 2nd Fret, but on October 12, 1967, I realized that ALL of the songs that I thought were recorded on October 11th were EXACTLY THE SAME as some of the songs recorded on October 12th, down to every last word of the between song banter. The most logical conclusion I came up with is that the recording of the October 11th concert doesn't exist. As I recounted yesterday, the date of that was wrong (it's not from 1966) and half of the songs were from some other 2nd Fret concert. Well, now I've determined that not just half but ALL of it is from other concerts, so figuring out the date it supposedly was recorded is a moot point. If you see any Mitchell concert recording purporting to be from November 1966 OR October 11, 1967, don't bother with it, because it's mostly just a jumbled version of this show. This is the one to get instead.

I'm happy at least I figured this out after just one day, before I spread any more confusion. To repeat, just delete yesterday's recording of a October 11, 1967 concert, and let's never speak of that again. ;)

Okay, with that unpleasantness out of the way, let's get to the music that's actually here. The short version is, if you're a fan of early Joni Mitchell, all three of these 2nd Fret concerts are very worth getting. (The third is yet to be posted here.) The sound quality is great, and the performances are great, with lots of rare and even unreleased songs, as well as plenty of entertaining banter between songs.

Anyway, regarding the sound quality, this one sounds excellent. As with the other concerts in this series, I carefully adjusted the volume within songs, and especially for the between song better, to make a better listening experience. The same problems I mentioned in the first album in this series happened here, but I think I pretty much fixed them. For instance, I once again removed some prolonged guitar tuning, except in cases where she was talking while tuning.

By the way, it appears Mitchell knew she was being recorded, because at one point, she had a verbal interaction at the start of a song ("I Don't Know Where I Stand") with the person recording the bootleg. We can only hear her side of the interaction. I think she says: "Are you rewinding, sir? ... Oh, you are? ... We're on the air? Oh no! ... That always scares me. Air fright."

I'm pretty sure the person she was talking to was Gene Shay, a Philadelphia folk music DJ who had her on his radio show multiple times in 1967 and 1968 before she was famous, when almost nobody else would. It's believed he's the one who recorded all three known 2nd Fret bootlegs, in order to play excerpts from them on his radio show at a later date, which he in fact eventually did. (But most of the time, when she was on his show she performed a few songs live between interview segments. I'll post some of that stuff at a later date.)

For the cover art, check my comments for the first album in this 2nd Fret series. In short, I used bits of an actual 2nd Fret poster or handbill of a Mitchell concert there in 1967 for the top and bottom sections. The main difference here is the middle picture. For this show, I used a photo of her performing on the Canadian TV show "The Way It Is" in December 1967. It was the closest good photo I could come up with. Since it's in black and white, I colorized it.