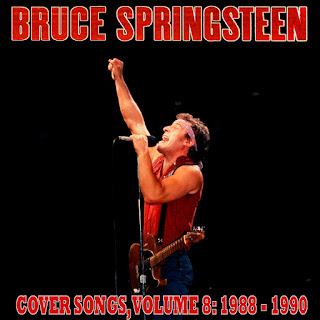 For the last album in this series, a few of the songs had rather rough sound quality, because they came from audience bootlegs recorded at small clubs. This time around I'm happy to say, pretty much every song sound fantastic. In fact, it may have the best overall sound quality in the series so far. It helps that eight out of the 12 songs have been officially released, which is a high ratio. But even the ones from bootlegs sound great.

By the way, you might think the first song, "For Your Love," is a cover of the famous Yardbirds hit from 1965. That's exactly the sort of song Springsteen would cover, and he played it when his musical career was just starting out in the mid-1960s. But in fact it's a more obscure song by Ed Townshend from 1958. The other songs are all the usual suspects.

Springsteen has played all of "Born to Be Wild" in concert a few times. But the bootlegs I heard were of poor quality. So instead I've used a version that was played as part of a medley. I've extracted it from the medley and given it a finish with audience noise in the end. But it's rather short, at only two minutes long. I figured meeting basic sound quality standards was more important than getting a version that lasted a minute or two longer.

I've specified that "Bad Moon Rising" is the "acoustic version," because I'm including a full-band rocking version in a later volume in this series. It's exactly the same for "Highway 61 Revisited." I include acoustic and electric versions like that for just two more songs in the entire series. (There are other acoustic performances in this album series, such as "Blowin' in the Wind" on this album, but I don't feel the need to point that out unless there's more than one version of the same song across the series.)

By the way, it was pointed out to me today that I'd overlooked the cover song "Trapped," which had some official releases in the early to mid-1980s. So I've just added that to volume 6 of this series (1981-1984). If you've downloaded that, you might want to do it again, to grab that song too.

I don't know the date or location of the cover art photo. It's clearly from the 1980s, probably the mid-1980s. But it's such a great pose that I decided to use it here even if it doesn't exactly fit. Also, I didn't find any really good photos specifically dated to the late 1980s.
Posted by Paul at 11:57 PM