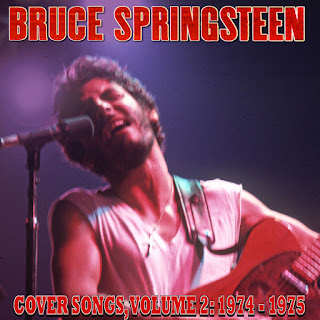 I just posted the first album in a very long series of Bruce Springsteen cover version albums. That first album is a rather odd one, because it goes so far back to the very start of his long career. So I'm posting this one to give you more of a sense of how the rest of this series will go.

Springsteen's first album was released in 1973. He achieved superstar status quickly, appearing on the covers of Time and Newsweek in 1975. Thanks to that fame, from about 1973 on, there are lots of quality bootlegs of his concerts. Even better, in recent years, Springsteen has allowed the official release of dozens upon dozens of concert recordings. As usual, I'm using both official and unreleased sources. Thus, I have way better sounding material to work from than when I made a similarly long series of Tom Petty cover version albums. Generally speaking, these official releases just use the location and date as the album titles. So if you look at the mp3 tags and you don't see "unreleased" there for a given song, it comes from one of those official releases. (For this album, it so happens that none of the songs are officially released, because so far there have been very few such releases from 1975 and none from earlier years.)

My main goal has been to use the best sounding versions whenever possible (unless there was something wrong with the performance, which almost never happened). Sometimes, Springsteen has played the same cover song dozens, or even hundreds of times over his long career. In cases like that, if I have a bunch of excellent versions to choose from, I've generally tried to go for the earlier versions. But in case you're wondering why I didn't include a cover song you know he did in a particular time, that's almost certainly because it shows up on a later album in this series.

For instance, I kind of surprised myself by only including one song performed in 1973, which is on the first album in this series. I could have included more, because he did a lot of cover versions that year, but by chance I found better versions of those songs in later years. I only have two songs from 1975 here, but there are a lot more from that year on the next album.

In addition to rejecting some songs due to sound quality issues, very very rarely, I rejected songs simply because I didn't like them. That almost never happened, but there's one example from around this time. Springsteen played a very odd instrumental version of "Satin Doll" a bunch of times in 1973 and 1974. I don't know if that was supposed to be a joke or what, but I left it off.

Also, usually for this blog, I like to post albums that ideally are about 40 to 45 minutes long. I consider that a good length to get you fully into a particular mood or sound an album creates without having it get boring. But since I have so very many cover versions to deal with in this series, I've opted to make albums that are closer to an hour long. This one, for instance, is pretty much exactly one hour long. Except all the others to be in that ballpark.

Oh, there's one more thing for me to mention. Generally speaking, I consider Springsteen playing with the E Street Band to be the default for his long career. So I don't usually include the band name in the song credits, unless he played with some band other than the E Street Band.

The cover art photo depicts Springsteen in concert in 1974. I edited the two lights near his head, because I found their brightness distracting.
Posted by Paul at 11:15 PM