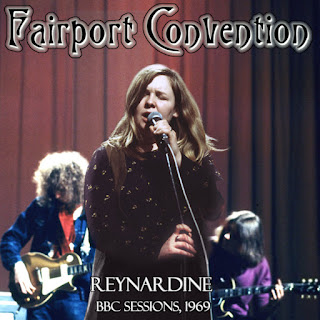 It's been a long time since I've posted any Fairport Convention, but I get around to everything on my "to do" list eventually. Here's the next from their late 1960s/early 1970s heyday, when both Richard Thompson and Sandy Denny were still in the band.

This is another album of BBC performances. The band has lots of great BBC material. It was enough for a four CD box set just of BBC stuff, and that didn't even cover all of it. I've taken that and broken it into more manageable album-length chunks of about 40 to 45 minutes each, organized chronologically.

The first seven songs here come from the box set I'd just mentioned. The last two are still officially unreleased. They're not actually from BBC performances. Instead, they were private rehearsals. But they sound just like the other tracks in terms of stellar sound quality as well as a lack of any audience noise. Plus, they're both key songs that don't duplicate any of the others. So I've added them in.

The cover art photo needs some explanation, because I did some editing. It's of Fairport Convention in concert in Copenhagen, Denmark, in November 1969. It features Sandy Denny in the foreground, with Richard Thompson and Simon Nicol in the background. The tricky bit is that it's actually two photos combined. One photo was pretty much like this, except Denny's head was bowed down in a strange position. I found another photo from the same series that had her head up in a much better way, but it was a close-up that didn't have Thompson and Nicol in the background. So I basically pasted in her head and part of her upper body from the close-up photo to overlay her bent head and create a better picture. The reason I did all that is because I've found very few good photos of the band in their heyday, especially in color.
Posted by Paul at 3:53 PM