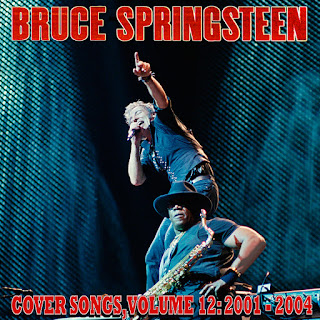 Here's the next in my Bruce Springsteen cover songs series. I was too busy to post one yesterday, but I'm still usually posting one a day.

This one covers the years 2001 to 2004. During these years, Springsteen was back playing full blown rock and roll. (He'd go back into another folky phrase for a couple of years after this.) So this album is filled with the classic rock and soul songs he loves, mostly from the 1960s.

In terms of sound quality, this is another album where nearly all the songs are officially unreleased. All but two songs, in fact. That means the sound quality is variable, but generally pretty high.

The songs "Hold On, I'm Coming" and "I Thank You" have been heavily edited down. Both of them are duets between Springsteen and Sam Moore of "Sam and Dave" fame. They're fine performances, except in their original versions they went on way too long for my tastes. Both were about double the length they are here. I have no problem with long songs if there's a point to the length, but in both cases, Springsteen and Moore just kept singing the same choruses over and over and over and over again. So I cut the songs down to something close to their original studio versions.

Note also that I've included the song "All Along the Watchtower" even though I had a different version of that song on a recent volume of this series. That's because that previous version was all sung by Springsteen and played with a relatively obscure New Jersey band, while this version is a duet between him and Neil Young, with both of them trading vocals and lead guitar solos.

For the cover art, to keep things interesting, I chose a rather unusual photo of Springsteen standing on a piano in front of band member Clarence Clemons. It was taken in East Rutherford, New Jersey, in 2003.
Posted by Paul at 10:22 AM