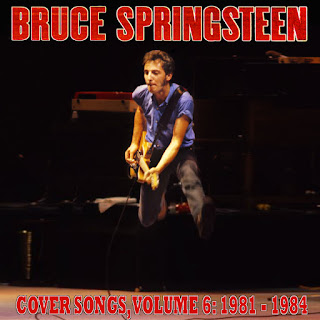 Note that the song "Shake" is an edit. It was part of the "Detroit Medley" that he often performs. I edited just that one song out of the longer medley, then added some audience noise at the end. But it's long enough to stand on its own as a song, and not just a snippet.

As usual, unless specified otherwise, all songs were performed with the E Street Band. The two songs from 1982 and 1983 mentioned above actually were done with different bands.

This time around, seven out of the 15 songs have been officially released. But it doesn't make much difference, since all the songs sound great. The two club performances probably sound a little rougher than the rest. Oh, plus, the first two songs, "Double Shot (Of My Baby's Love)" and "Run through the Jungle," sound a bit rough, and obviously come from audience bootlegs. Plus, Springsteen inexplicably said "Run through THIS Jungle," every single time.

For the cover art, I picked a photo showing Springsteen jumping high in the air. I had to crop it carefully to show how high he's jumping without making his body too small. Hopefully you can see what's going on. The photo was taken at a concert in Oakland in 1981.
Posted by Paul at 11:59 PM