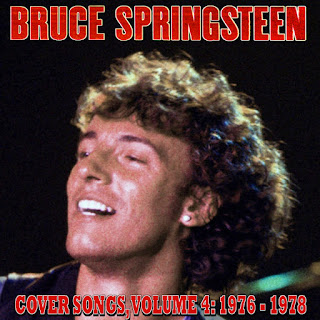 Here's the next in my series of Bruce Springsteen cover songs albums. This one covers 1976 to 1978, with most of the songs from 1978. That's good, because many die-hard Springsteen fans say that 1978 was the peak year for his live performances.

There's not much to say this time around. But I should mention something about one of the songs, "Heart Full of Soul." Springsteen never actually played this song in concert. Instead, this recording comes from on on-stage rehearsal that somehow got bootlegged. The recording isn't as good as the other songs, but hopefully it's good enough. I added crowd noise at the end, so it would fit in with the other songs.

Six of the 15 performances here have been officially released. Most of the rest sound just as good, but a couple sound a little worse than the others. "Honky Tonk" had a half-minute section in the middle where the volume dropped dramatically for no reason (and I'm sure that was due to the recording, not the performance). I think I fixed that.

Also, I want to take a moment to credit a couple of websites that helped me in the making of this album series. One is "Brucebase." I probably wouldn't have done the series at all, or at least done it badly, had it not been for that resource, which is like a Wikipedia for Springsteen concert information. It can be found here:

The other webiste I want to mention is called "Covered by Bruce Springsteen." It's an entire website devoted just to documenting the cover songs he's played. That helped me figure out which songs to include. You can find it here: