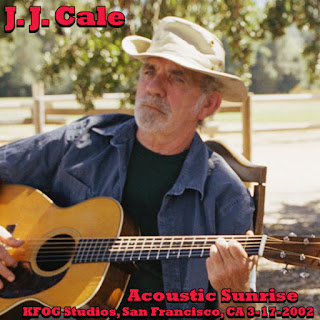 I just posted some Eric Clapton music, and that put me in the mood to post some J. J. Cale music. If you didn't know, Clapton is heavily influenced by Cale, and has covered a bunch of his songs. In fact, Cale talks about that some between songs on this recording.

I like a lot of Cale's stuff, although sometimes it gets too repetitive. However, not many non-albums tracks by him seem to exist, for whatever reason. (That's not counting a recent archival compilation called "Stay Around," which is very good, and makes a good listen by itself.) So I don't have much from him to post, but I do have this concert, and I think it's a "must have" for any fan of his music.

What makes it special is that he performed all the songs in a solo acoustic setting. (He's joined on backing vocals by his wife Christine Lakeland on some of the songs.) Solo acoustic is a good fit for him, since his music has a laid back vibe to it, but as far as I know, this is the only truly acoustic recording from him that's become available. Even then, it's a bootleg. Luckily, it was recorded by the San Francisco radio station KFOG for their morning show "Acoustic Sunrise," so the sound quality is pretty much perfect. There is an audience, but it's small in number and fairly quiet.

The only bummer about this concert is that it's fairly short. So I've added the one stray unreleased acoustic recording I have from him, a version of his song "Miss Ol' St. Louie," and I've tacked that on the end. That apparently was recorded in 2008. Even with that addition, the album is fairly short, at 37 minutes. But it's a really nice concert all the way through.

I randomly found the photo of Cale that I've used for the cover art. I have no idea where or when it's from. But judging by his appearance, it's from his later years. I used it because of that, plus it features him playing an acoustic guitar instead of his usual electric one.
Posted by Paul at 5:38 PM