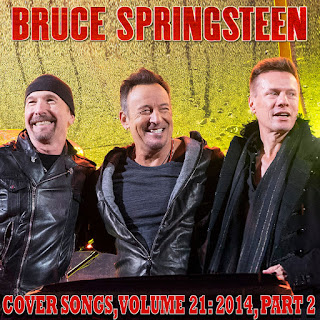 As I mentioned previously, 2014 was a "bumper crop" year for Bruce Springsteen doing cover songs in concert that he'd never done before. In fact, he played so many songs that it's the only year where I've mad two albums just from that year (plus more songs on the adjacent albums).

Also, 2014 was a "bumper crop" year for the release of his officially released live albums (though download only). Thus, only three of the songs here are unreleased, and at least two of those are from excellent sounding soundboard sources. That makes this one of the best sounding albums in the series.

In terms of song selections, most of them are the usual classic rock and soul hits, generally from the 1960s. But there are some exceptions. He did a few folk songs associated with his 2006 Pete Seeger-themed album. I chose these versions instead of versions around 2006 because these have slightly better sound quality. He also did some unexpected songs, especially "Clampdown" by the Clash and "Don't Change" by INXS.

But perhaps the most intriguing songs are the last two, the U2 hits "I Still Haven't Found What I'm Looking For" and "Where the Streets Have No Name." These aren't the usual duets where one person sings a verse and the other sings the next verse, and so on, and they join in on the chorus. Instead, U2's lead singer Bono was hurt in an accident and couldn't make it for a benefit concert, so he asked Springsteen to fill in for him instead. Thus, Springsteen sang all the lead vocals, the other three members of U2 backed him up, and Bono wasn't even there.

As part of my effort to make some of these album covers a little unusual, I chose one of Springsteen standing with two members of U2, The Edge and Larry Mullen, Jr. This was taken in the concert performance documented by the last two songs.
Posted by Paul at 11:17 PM