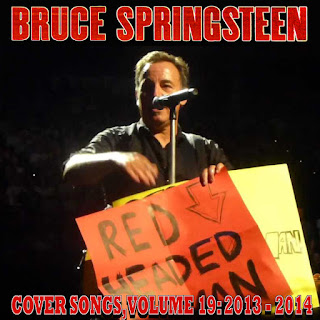 Sorry about the delay in posting this. I thought I'd be able to post each day right through Christmas, but holiday stuff took up too much of my time. As it is, this series is coming to an end soon, since this is volume 19 out of 22.

About half of the songs here date to 2013 and the other date to 2014. That's important, because the 2013 ones are mostly officially unreleased, and have varying (but at least still good) sound quality. Whereas with the 2014 songs, I don't know why, but for some reason Springsteen has officially released way more 2014 concerts than maybe any other year. Plus, the covers he did that year he usually did more than once. As a result, only two out of the six 2013 songs are officially released versions, but all seven of the 2014 ones are.

By the way, 2014 is a bumper crop year for Springsteen's cover songs in general. The next two albums in this series come entirely from 2014, and virtually all of them are officially released, which means excellent sound.

One unusual aspect of this album is that two of those songs are actually sung in Spanish. As if Springsteen isn't talented enough already, apparently he's a fluent Spanish speaker too. (In putting this series together, I had to edit out some lengthy spoken introductions where he spoke Spanish.)

Oh, and by the way, who would ever have thought Springsteen would cover AC-DC's "Highway to Hell?!" But he does that here, and there are lots more interesting surprises to come on the other 2014 albums in this series.

I'd mentioned in a previous volume in this series how, in recent years, Springsteen has a tradition of collecting cards from the audience with requested song titles on them. I found a 2013 photo of this tradition in action.
Posted by Paul at 4:34 PM