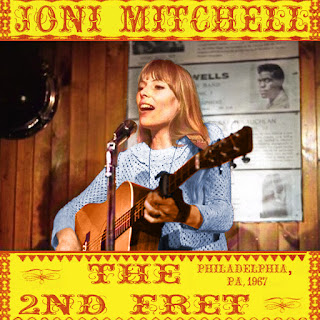 This is the third and last of three Joni Mitchell concerts in 1967 at the 2nd Fret in Philadelphia. All three are excellent performances with excellent sound quality.

The big question I have for this concert is what date did it take place? I found this on a bootleg that gave a rough date of "November 1966." But that same bootleg noted that was probably wrong, because at one point in the between song banter, Mitchell commented, "In Canada, this year is Expo." That's a reference to Expo67, a celebration of Canada's 100th anniversary as a country in 1967. So it almost certainly took place in 1967.

But when within that year? The bootleg says it's from the 2nd Fret. That seems highly likely, because the only soundboard quality bootlegs of her from 1967 were recorded there by Philadelphia DJ Gene Shay, and this is a soundboard recording. But the exact date is much harder to pinpoint, because Mitchell played that club at least 39 times in 1967, over a series of stands from January to October.

I tried to listen carefully to her talking between songs for clues about when it was recorded, but I didn't find much. Before "The Circle Game," she told an entertaining story about how she filmed a promotional video for that song in a field with some cows. That was for a Canadian TV program called "Mon Pays, Mes Chansons," which was recorded in late 1966 and broadcast in February 1967. So I'm guessing it probably dates to early 1967, when that incident was still relatively fresh in her mind.

By the way, the video with the cows that she discussed can be seen on YouTube here:

She also mentioned in passing that folk singer Tom Rush was probably her biggest booster, because he played two of her songs, "Urge for Going" and "The Circle Game." Rush released his version of "Urge for Going" in 1966, but didn't release any music in 1967, so his version of "The Circle Game" didn't come out until 1968. But he certainly played in in concert a lot in 1967, a fact she mentioned in a 1967 radio interview. That also suggests an early 1967 date to me, because as 1967 went on, more and more prominent musicians covered her songs.

if I had to guess, since we have one known bootleg of her recorded at the 2nd Fret on March 17, 1967, I think it makes sense this was recorded around that same month. But that's just a guess. All we can really say with reasonable certainty is that it's from 1967, due to her Expo comment.

As far as the music goes, it's a set of about 30 minutes, which fits with all the other 2nd Fret recordings of her that year. The last two songs actually are from a different source, and probably were recorded on a different date. All I know about them is that they also are from the 2nd Fret some time in 1967. So they fit nicely as extra tracks here.

The various bootlegs of her 1967 2nd Fret shows typically have some extra songs added that come from early TV and radio performances. I've collected the best of those from lots of different sources and will be posting those separately.

See the previous two 2nd Fret concerts I posted for a detailed explanation of the artwork at the top and the bottom of the cover. Regarding the center photo, I couldn't find any good photos of her in concert from 1967, so I had to resort to one from 1968. It was taken at the Riverboat Coffee House in Toronto, Canada, in April 1968. I like how the wall in the background gives a sense of how she was playing at small clubs at the time. I colorized it.