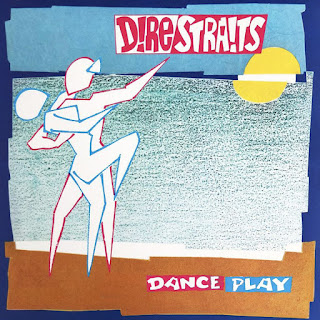 There are lots of great musical artists I haven't posted anything for yet. Dire Straits is one of them. So here's the first.

Dire Straits don't have a lot of stray tracks. The band's main force, Mark Knopfler, broke up the band around 1993, after he felt it got too big with the massive success of the 1985 "Brothers in Arms" album, which sold an incredible 30 million copies. Ever since then, he's tried to do as much as he can to promote his post-Dire Straits career and downplay his Dire Straits career, for instance playing the bare minimum of Dire Straits songs in concert to keep his fans from getting upset. As part of this approach, there has been very little in terms of archival releases or even bonus tracks.

Thus, there probably aren't as many stray tracks as there would be if the vaults were opened up. Happily, there are a few B-sides and other obscure releases, as well as some songs that were only played in concert. I believe all the songs here are originals (not counting the bonus tracks).

Probably the heart of this album is the three songs that make up the "Extended Dance Play" EP, released in 1983. One of those songs, "Twisting by the Pool," was a hit. But Dire Straits always had high standards and consistency, and all the songs here are good.

I don't know the name of the two acoustic instrumentals that end the album. The first part of the second one sounds like the Elvis Presley classic "That's Alright Mama," but that's only a snippet and then the song goes in very different directions. The start of the first song and the end of the second one had a French DJ talking over the music, because these come from some French TV show. I removed the parts with the talking, but it was only a few seconds in each case.

Speaking of high standards, I kept high standards when it comes to sound quality. The two bonus tracks are good, but they've been relegated to bonus tracks because their sound quality isn't as good as the others. "Bernadette" is written and sung by David Knopfler, Mark's brother, who was in the band as rhythm guitarist for their first two albums. The start of the song sounds remarkably similar to "London Calling" by the Clash. But this may just be coincidence, because "Bernadette" was first played in concert in September 1979, and "London Calling" wasn't released until December 1979. However, perhaps it was never officially released due to the similarity (and/or maybe simply because it was a David Knopfler song instead of a Mark Knopfler one).

The album cover art uses the cover for the "Extended Dance Play" EP I mentioned above. The album title "Dance Play" doesn't make much sense for the type of music it is, but I have to admit I picked that title so I could use this cover with a minimum of changes. All I did was remove "Extended" from the title text, as well as greatly shrinking the "E" at the end of "Dance" and the "P" at the start of "Play." (Those two letters - "E" and "P" - had been emphasized to reflect the fact that the release was an EP.
Posted by Paul at 1:38 PM