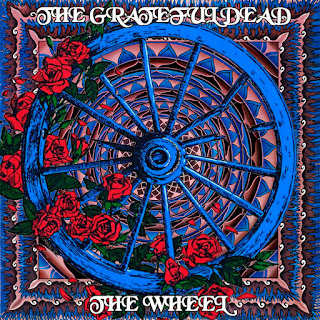 I've mentioned how I filled the big gap between the Grateful Dead's studio albums in 1970 and 1973 by making no less than four albums out of the original songs in that period. This is the fourth and last of the albums I've made.

The reason they didn't release any studio albums at that time was because the songs appeared on solo albums by Jerry Garcia ("Garcia") and Bob Weir ("Ace"), plus they put lots of new songs on their live albums, especially "Europe '72." Most of the songs here either come from "Europe '72" or associated archival releases from that same European tour. But, as I often do, I removed the crowd noise to make it all sound like a studio album.

There are two cases where I had to resort to the studio tracks from those solo albums I mentioned above. "The Wheel" is a great song, and the Dead played it a lot in concert. But, strangely, they didn't start playing it until about 1976, even though it was released on a 1972 album. I didn't want to stray chronologically from around 1972, so I was forced to use the version from the "Garcia" solo album.

It's a similar case with "Walk in the Sunshine," from "Ace." I believe that song was never played by the Dead at all, the only song from "Ace" they ignored. So I had to use the version from that album.

As for the album as a whole, I was careful to keep the usual mix of songs sung by Garcia, Weir, and Ron "Pigpen" McKernan. Garcia has the most, and McKernan the least.

Also, as I did for all the four albums i made from this time period, I included one cover song. Each time, I picked a cover that has become so closely identified with the Dead that many assume they wrote it. This time, I went with "I Know You Rider." The Dead played this a billion times in concert, almost always as a medley with "China Cat Sunflower."

The Dead truly were at a peak in the early 1970s, so this is a great album. While putting these four albums together, I came across a lot more cover versions that I didn't have room to include. But I'm planning on organizing that material and posting it here eventually.

I'm very pleased at how this album cover came out. When I decided to name the album "The Wheel," I went looking for wheel-related artwork. I found a blue wheel with some red roses on it, which seemed fitting since roses are one of many Dead visual symbols. But just having that seemed too bland, so I went looking for mandala artwork, since that's another circular thing that fits with the Dead ethos. I found a nice one, overlaid the blue wheel on top of it, and the two seemed to fit perfectly. :)
Posted by Paul at 5:37 PM