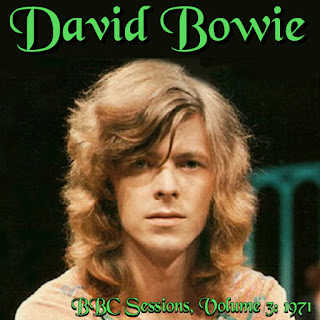 I recently posted a David Bowie performance in which he played for the BBC in 1970 for a full hour. This similarly covers him at the BBC in one year, but is mostly made up of two appearances.

In 2000, the official album "Bowie at the Beeb" was released, compiling Bowie's performances at the BBC from 1968 to 1972. But one reason I'm posting this is because that album was woefully incomplete. Only half of the performances here come from that album. The others sound just as good (or nearly so), and are different songs, so why weren't they included? I suppose there wasn't enough room. But here, I don't have to worry about space considerations.

One strange thing about Bowie at this time was he kept collaborating with musicians who weren't nearly as talented as he was. This album is a case in point. For three of the songs, two of them written by Bowie, he had someone else sing lead vocals while he merely accompanied them. One of those singers, Dana Gillespie, already had two albums released before she briefly collaborated with Bowie, and she went on to have a long career as a blues singer. But the other two, George Underwood and Geoffrey MacCormack, stayed in musical obscurity except for their brief spotlight with Bowie.

I've avoided including two versions of the same song. But I've made one exception: the song "Andy Warhol." The first version is sung by Gillespie, and the second version is sung by Bowie. Happily, I was able to put them on opposite ends of the album, even though all the songs are in chronological order.

At this time, Bowie was almost entirely a British phenomenon, and in fact even in Britain he wouldn't break really big until 1972. Thus, he didn't appear on many TV or radio shows outside of Britain. However, I did manage to include one. The first song, "Moonage Daydream," actually comes from a Radio Luxembourg performance, not a BBC one.

For the cover art, I found a photo that I think is from 1970. The photo was undated, but that's pretty much the only time he had a haircut like that.
Posted by Paul at 8:30 PM