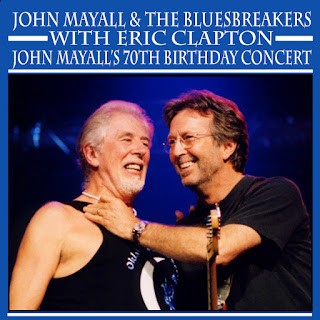 I recently posted a couple of albums by John Mayall and the Bluesbreakers, from the short time Eric Clapton was a part of that band in the mid-1960s. I've got one more thing from them that took place much later. Clapton reunited with that band one time only, as far as I know, which was for Mayall's 70th birthday in 2003.

The entire birthday concert was released on CD and DVD. However, as I've mentioned previously, I'm not a big fan of Mayall's singing, though I'll admit he'd gotten a lot better by the time of this concert, compared to his 1960s work. I'm mainly interested in this for the guitar work of Eric Clapton. So I've edited the over two-hour-long concert down to just the songs that feature Clapton on them.

If you add up all the songs with Clapton, it comes to exactly one hour. Jazz trombonist Chris Barber also features on some of those songs. Guitarist Mick Taylor, who was a member of the Rolling Stones in the late 1960s and early 1970s, joined on on the last song. (He's the main guest star for most of the songs I didn't include here.)

This concert gives Clapton a chance to wail away on his blues guitar in a way he hasn't done that much for the past several decades. The song "Have You Heard" is a particular soloing showcase that goes on for 18 minutes. He also sings lead vocals on two songs, "Hoochie Coochie Man" and "I'm Tore Down."

Since this has been officially released, the sound quality is excellent. I had one quibble with the recording though, and that's how the applause after each song went on and on. So I cut that back to more typical lengths, and shaved a few minutes off the length of the recording as a result.

The cover features Mayall and Clapton from the concert. It's a different cover and photo than the one for the official album. And no, Clapton isn't choking Mayall! ;)
Posted by Paul at 7:09 PM