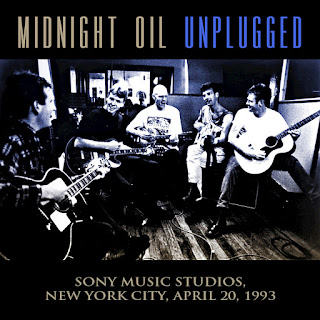 In 1993, MTV's "unplugged" phenomenon was all the rage, to the point that even Midnight Oil decided to get in on it. Midnight Oil is a rocking band, but a lot of their songs have an acoustic base, such as the urgent guitar strumming to their hit "Beds Are Burning." So the idea worked well, although admittedly the band bent the concept a bit by still having bass and drums.

The band's unplugged performance was shown on TV at the time, but no album of it was ever released. (A DVD of it was included on their 2017 box set of rarities "Overflow Tank," but strangely, that was missing one song.) So here it is. I think it's an excellent concert, with great sound. It's kind of like their greatest hits up until 1993 (and most of their hits were from before then), but with a semi-acoustic twist.

It's a fairly long concert compared to how these things usually go, at an hour and 34 minutes. I'm guessing MTV only broadcast parts of it to fit it into an hour, but I'm not sure.  I didn't have to do much tweaking. But there's a fair amount of talking, and I broke all of that into separate tracks.

By the way, the band later did some more acoustic stuff, especially around the year 2002. I've compiled that into another album, and I'll post that at a later time.

For the album cover, I just used the cover to a popular bootleg of the concert. The only change I made was that I replaced the text at the bottom, so it would include the exact date of the show.
Posted by Paul at 1:50 PM