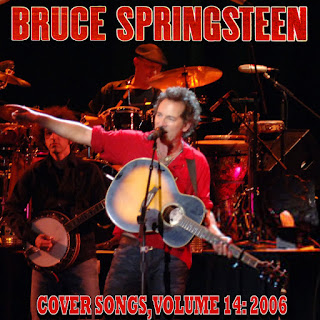 For this next album in the Bruce Springsteen cover songs series, Springsteen went back to his folkie style. As I explained in the post for the previous album in the series, in 2006, he released the album "We Shall Overcome: The Seeger Sessions," which was filled with cover songs previously done by folk singer Pete Seeger. So naturally this 2006 collection is dominated by songs from, and related to, that album.

I already posted four songs at the end of the previous album that are related to that album. For this album, all the songs are related in style. However, not all the songs here are songs from that album. He released a live album in 2007, "Live in Dublin," that was from the tour to promote the album. So naturally, it contained a lot of songs from that album, plus some in a similar vein. But there were yet more songs in that style that didn't make the studio album or the live album.

As if that isn't confusing enough, there are a couple of songs from this time period that I simply didn't like at all, so I didn't include. One example I can remember is the children's song "Froggy Went A-Courtin'." It's not a song I'm wild about in the first place, and it just didn't sound that good when Springsteen did it.

In terms of sound quality, eight of the 12 songs this time are officially released. If you look at the unreleased four ("Rag Mama Rag," "Samson and Delilah," "Turn, Turn, Turn" and "Shenandoah"), those are all songs that didn't make it onto either "We Shall Overcome" or "Live in Dublin." (That's also true for "Long Black Veil" from the previous album in this series.) But even the unreleased songs are very well recorded, so this album sounds better than most in this series.

By the way, this album finishes all his 2006 cover songs. The next one in the series will start with 2007, with Springsteen back in fully rocking mode.

The cover art shows Springsteen in Ashbury Park, New Jersey, in 2006.
Posted by Paul at 2:55 PM