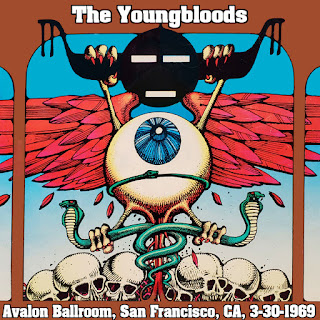 Today, I was searching the Internet for some specific music and stumbled upon this concert. I was so delighted by it that I'm posting it straight away.

The Youngbloods are best known for their hit song "Let's Get Together" (often known as "Get Together"), but they're a lot more than that. I highly recommend their 1969 album "Elephant Mountain" in particular. Since they're not that famous of a band, it's a lucky break that bootleg of them from the 1960s exists with excellent sound quality. This concert sounds great because it was played live on air by the radio station KPFA.

When I found this, it had the date of March, 30, 1968. But when I listened to it, lead singer Jesse Colin Young mentioned between songs that their new album "Elephant Mountain" was being released "on Tuesday," and that was released in April 1969. I dug a little deeper and eventually found a fan site with lots of concert date info, and that confirmed that the KPFA live broadcast was from 1969 instead.

I believe all the songs are originals except "Too Much Monkey Business" by Chuck Berry and "The Dolphins" by Fred Neil. The latter song was never put on any album by the band.

The last song, "Sunlight," isn't from the concert. I tried to find an unreleased version of "Let's Get Together" to add to the album, since it's their signature song. I couldn't find a good one, but I came across a nice version of this song from a TV show later in 1969. Maybe it's for the best not to include "Let's Get Together" since it does get overplayed.

If you haven't heard much from this band, this is a good way to get started. The last three songs are all classics, in my opinion.

The album is 54 minutes long, including the extra song at the end.

Based on the album cover, you might thing these guys are a trippy psychedelic jam band. Not so. They do jam some, but they're based in folk rock. I chose this cover because it's a concert poster for the Youngbloods appearing at the Avalon Ballroom in February 1969. So it's not for this exact concert, but it's only a month earlier, which is close. Besides, I really like the poster art of Rick Griffin, who made this one.

The original poster is very wide. I had to crop the sides to get it to fit into the square album cover format.