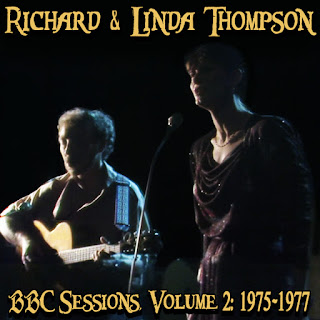 Here's the second of four albums of Richard and Linda Thompson performing for the BBC.

What sticks out for me on this album is the small number of songs. The previous volume in this series is about the same length as this one, 45 minutes, but that one has 13 songs on it and this one has six. The reason is because the last three songs are long guitar work outs. So if you enjoy Richard Thompson's guitar soloing, you'll love this album.

All of the performances here have been officially released, so the sound quality is fantastic. All but the first one are concert recordings. But as I often do, I removed the crowd noise. The recording is so pristine that it was easy to make that removal, and the songs sound like they were recorded in an empty room.

As I mentioned in my comments for the first album in this series, the only repeated song is "A Heart Needs a Home." I would have included more banter, but there is only one brief comment before one of the songs.

I'm not exactly sure where or when the cover art image comes from. It's a screenshot I took from the DVD that comes with the Richard (and sometimes Linda) Thompson album "Live at the BBC." I think it's from 1981, since most of the footage is from that year.