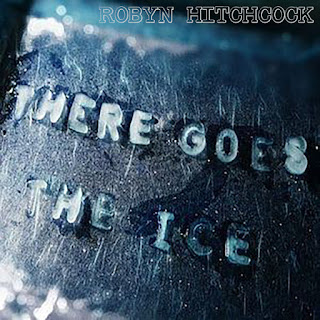 Here's the next in my long series of Robyn Hitchcock stray tracks albums. This uses the title of a very obscure album he put out called "There Goes the Ice," but it doesn't have much resemblance to that, sharing only four songs. That actually was a stray tracks collection of sorts, and had some songs going back a few years. I actually have more songs from it, five, on my previous stray tracks album, "Dragonfly Me."

The few songs from that compilation are mixed in with other a couple of cover songs from tribute albums ("There Ain't No Santa Claus on the Evenin' Stage" and "Parasite"). Then there are three unreleased songs at the end. The last one "Something about the IMF," was created on the spot after someone in the audience shouted for Hitchcock to sing "something about the IMF," the world financial organization the International Monetary Fund.

This is a rather short album, at only 34 minutes. Unfortunately, the amount of stray tracks from him goes down around this time, and has stayed lower than before. I think much of that is due to his growing realization that his concerts were getting bootlegged and he was wary about having things he was testing out or creating spontaneously being recorded for posterity. I've seen some comments he made to that effect, though I forget the details.

The cover art is the same as on the official release, except that I've added Hitchcock's name to the top.