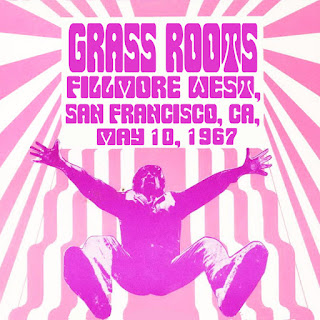 The Grass Roots are reasonably well known, but only for a handful of hit singles, most especially "Let's Live for Today." For many people, they're seen as a lightweight pop group that was just a vehicle for hit songs written by others, and not a serious rock band. That ended up becoming true, but for about two years they actually were a serious, legit, and talented rock band. This concert comes from that time period.

The Grass Roots have a very strange history. It began as a vehicle for singer songwriter P. F. Sloan, along with his production and songwriting partner, Steve Barri. Together in 1965, they wrote the song "Where Were You When I Needed You." It was sung by Sloan, who was a capable singer (as well as a writer of many 1960s hits, most notably "Eve of Destruction"). But after it became a minor hit in 1966, a band was needed to promote it. The record company didn't want Sloan and/or Barri involved, since they were too valuable as songwriters and producers for many bands and not just this one. So a little known San Francisco band called the Bedoins were recruited to be renamed the Grass Roots. They put out an entire album called "Where Were You When I Needed You" in 1966, which was very good because most of the songs were written by Sloan and Barri, and sung by Sloan.

The Grass Roots (a.k.a. the Bedoins) soon grew restless being basically just a front for Sloan and Barri. They wanted to do their own blues rock songs. The record company didn't agree, so the band quit, and promptly faded into obscurity. That meant a new Grass Roots was needed for new songs. Another obscure band was chosen, this one from Los Angeles, called the 13th Floor (which by the way was a totally different band than the much better known 13th Floor Elevators in Texas). This group was talented, and their lead singer Rob Grill had a great voice. Sloan and Barri helped find and produce their next single, "Let's Live for Today." The song actually got started as a song in Italian by the Italian group the Rokes. Translated into English, "Let's Live for Today" was a huge hit for the Grass Roots in 1967, selling over two million copies.

After a big hit like that, it was natural that a "Let's Live for Today" album followed. This is a surprisingly good album, and not just a hit song plus a bunch of filler. Most of the songs were written by the very talented Sloan and Barri, but also the actual Grass Roots band (a.k.a. the 13th Floor) wrote some songs that were on the same level. (Two can be heard on this recording, "Beatin' Round the Bush" and "House of Stone").

Another album followed in 1968, "Feelings." For this one, there were more songs by the band and fewer by Sloan and Barri. "Feelings" is another surprisingly good album, solid all the way.

Unfortunately, "Feelings" didn't sell well. Around this time, Sloan broke with the record company and began to withdraw from the music business, due to a variety of personal problems. Barri carried on as the producer for the Grass Roots. But the record company wanted hits. They pushed the band to do pop hits written by others instead of their own rocking material. This turned out to be a successful commercial strategy, as a number of hits followed, starting with "Midnight Confessions" later in 1968. But the band members were increasingly dissatisfied, and they began leaving one by one until 1974, when lead vocalist Rob Grill remained the only original member (from the second version of the band). The Grass Roots fizzled out altogether a couple of years after that.

I needed to explain all that so you can understand what this concert recording is about. At the time it took place, the Grass Roots were riding high from having their huge hit "Let's Live for Today." Their album by the same name had been recorded but it hadn't been released yet. Most of the songs played are originals or Sloan and Barri songs that would appear on that album. But they also did a few covers that they never put on record: "Got My Mojo Working," "Get Out of My Life Woman," "The Night Time Is the Right Time," and "Have Love, Will Travel."

I think if you'll listen to this you'll agree they were a talented band and not just a front group for some pop hits. Note especially the 12 minute long untitled instrumental, where they jam as well as most other jammy rock bands did back then. It's too bad the record company stifled their creative efforts and pushed them into the pop hit direction.

If you want to know more about the band, check out their Wikipedia page:

This recording happens to contain sections from two sets recorded on the same day. Who knows what else they played that day that we've missed, but luckily we get most of their best songs from that time period, especially "Where Were You When I Needed You" and "Let's Live for Today."

The first few songs of the recording have some problems where the quality drops from time to time, probably due to tape damage. By chance, the most damaged song was "Let's Live for Today." But it also so happens that was the only song recorded twice. So I deleted the first damaged version entirely and kept the perfectly fine second version. For the other damaged songs I fixed the problems as best I could, sometimes by adjusting the volume and other times by patching in bits from elsewhere in the song for repeated sections. After the fixes I made, I think the problems are minimal and you might not even notice them unless you listen closely.

So that's the long explanation. The TL:DR version is that the Grass Roots were a legit and talented rock band in this part of their career, and this recording has excellent sound for a 1967 bootleg. So I highly recommend you check it out, even if you're dubious about the Grass Roots in general.

If you enjoy this concert, I recommend you get the first three albums by the Grass Roots: "Where Were You When I Needed You," "Let's Live for Today," and "Feelings." True, the first one is performed by an entirely different band. But they're unified by the talented songwriting and production of Sloan and Barri. I'm a big fan of Sloan in particular, and I plan on posting some of his solo material here in the future.

This concert is 49 minutes long.

By the way, as a random aside, the lead guitarist on this recording is Creed Bratton. Does that name ring a bell? If it does, it's probably because, decades later, he was a cast member of the popular TV show "The Office," playing a character also known as Creed Bratton. Towards the end of that show's long run, it was finally mentioned that he had been in the Grass Roots long ago. The show had him play some lead guitar to reveal he had real musical talent and that wasn't just a joke.

It turns out it's very hard to find any good color photos of the Grass Roots from this time that aren't already used as album covers. So I searched for concert posters and I found an excellent one from when the band headlined a show at the Avalon Ballroom in 1966. Probably this was the earlier version of the band, but hey, it makes a great album cover just the same. ;) I had to do some cropping to get the rectangular poster into a square shape. I added some text, replacing the names of the supporting acts. But I used the exact same font as the original.